A unipivot made from scrap

Love it or hate it, it just won't stop
Post Reply
400 posts

There would probably have to be some modification to the chassis plate to allow the mounting boss to be dropped through and to allow access to the setscrews to lock the height adjustment, so some thinking to do. The hole the 75 arm boss fits in isnt very big

After some more listening, the grado is getting on my wick, tracking isnt up to par. That slight fluff-on-the-needle sound didnt take long to annoy me, perhaps ive been spoiled by the other carts. Shame, its otherwise nice.
I need to sort out another stylus for the 760. Probably an ml stylus to make a 740ml.
Also starring Rex Hamilton as Abraham Lincoln

Had enough of the Grado so its been taken off and put back in its box.

I've put the 540ml stylus off mi dads 540 on the 760 body and put that on it instead. Mi dad reckoned there was some damage to the cantilever on it, but I've been over it with a fine tooth comb and I can't find any. I've also cleaned the stylus with a fibreglass scratch brush.
Picked that little tip up from somewhere, it's come up lovely and clean, it's actually transparent again, the amount of crap it took off was well worth the 3 quid it cost for the brush.

I wouldn't recommend doing that to a 'spensive mc cart, but to extend the life of something thats sounding like it needs replacing its worth a go.
did a better job than the magic eraser sponge soaked in vodka did. 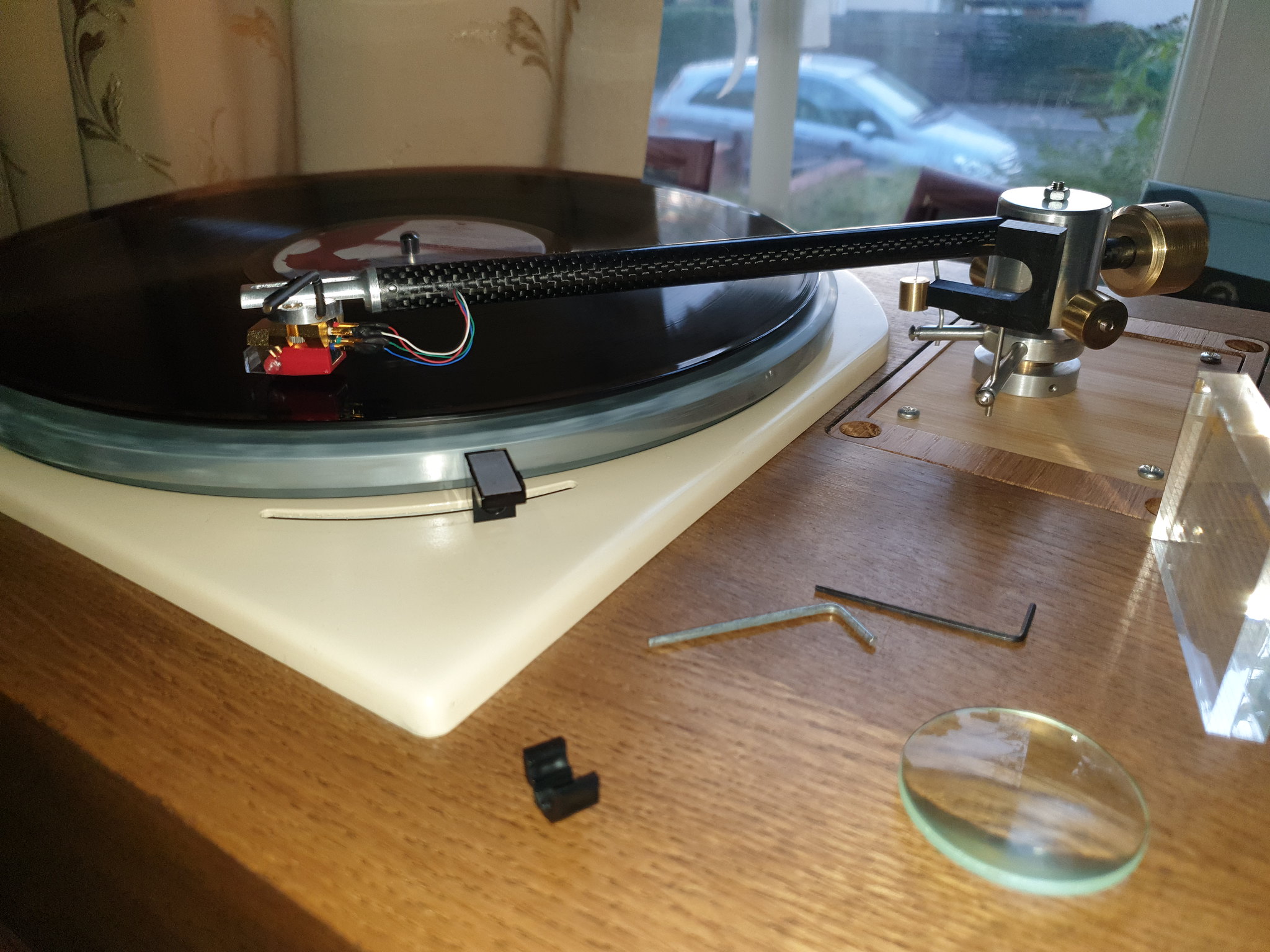 It does sound a little worn, but much more my preference than the Grado

I'll have to start putting a bit aside here and there for a new stylus, older kids, more expensive christmas this year. again....
Also starring Rex Hamilton as Abraham Lincoln

Bluddy shoddy!
"The fat bourgeois and his doppelganger"
Top

Ive come to the conclusion that i need to graft on an arm lifter.
Put a record on this morning with shakey coffee hands and it was nerve wracking. Plus its a pig to keep picking up the arm when lining up a cart.
There should be just enough space to fit one in by the looks of it. Need to get my hands on one from somewhere
Also starring Rex Hamilton as Abraham Lincoln

More stuff done.
To make it more user friendly I made an arm lift/lowerer thing
Bits 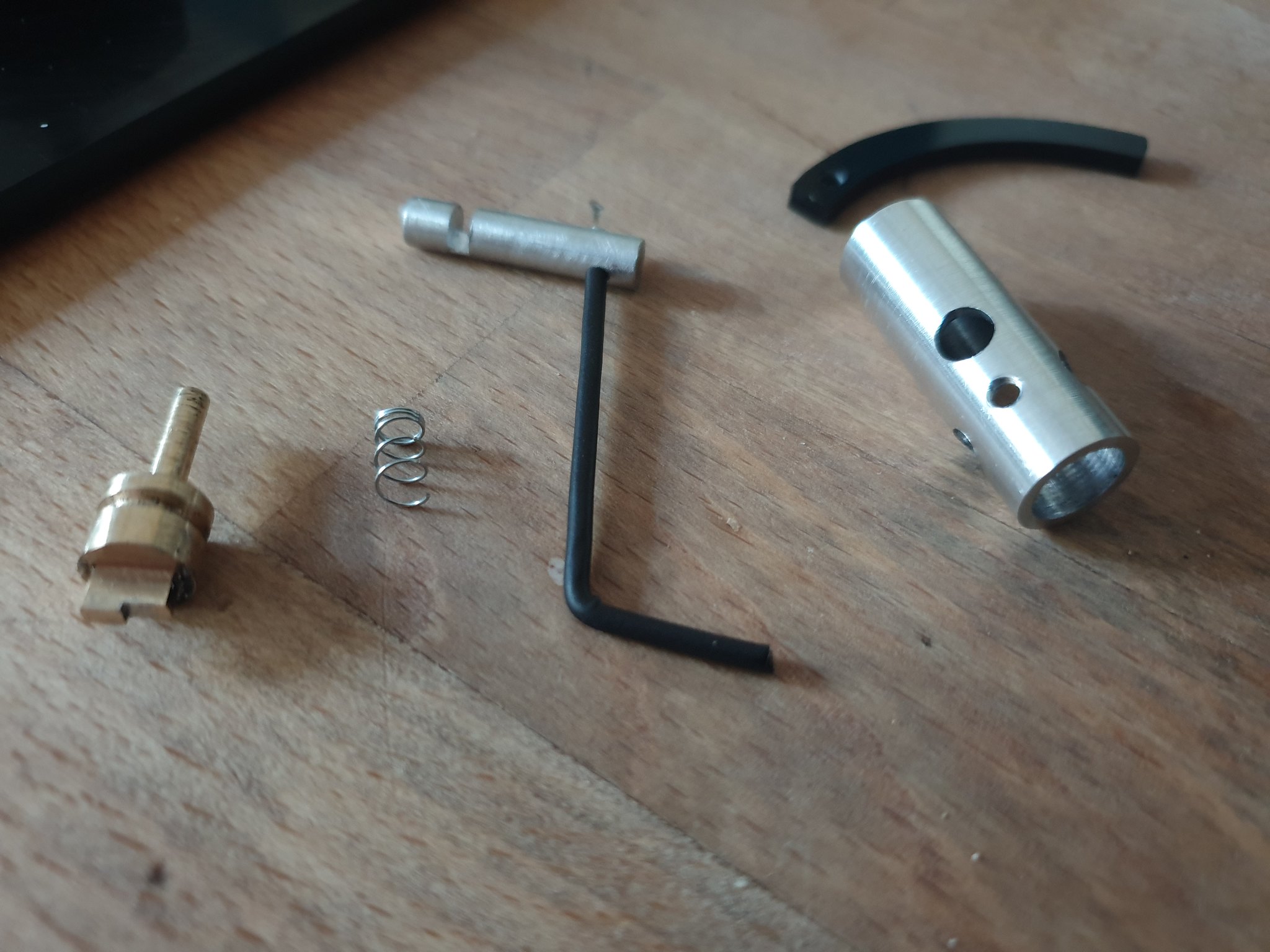 The cylinder is the body obviously, the spring is out of a pen, just cut down to the right size. The lever is simple enough, there is are 2 cuts machined into the large part that goes through the body so that it keys onto the piston part. The L shaped end is what it keys on. The bar has had 3 quarters cut out so that when the lever goes up it raises the piston against the spring and locks in the upward position at the top of travel.
the groove in the piston is there to retain the silicone grease for damping the lowering.
The piston locks the lift bar in place so it cant come out without pulling the top of the piston up to release it. the curved bit is the bit that lifts the arm. Just some 3mm acrylic. 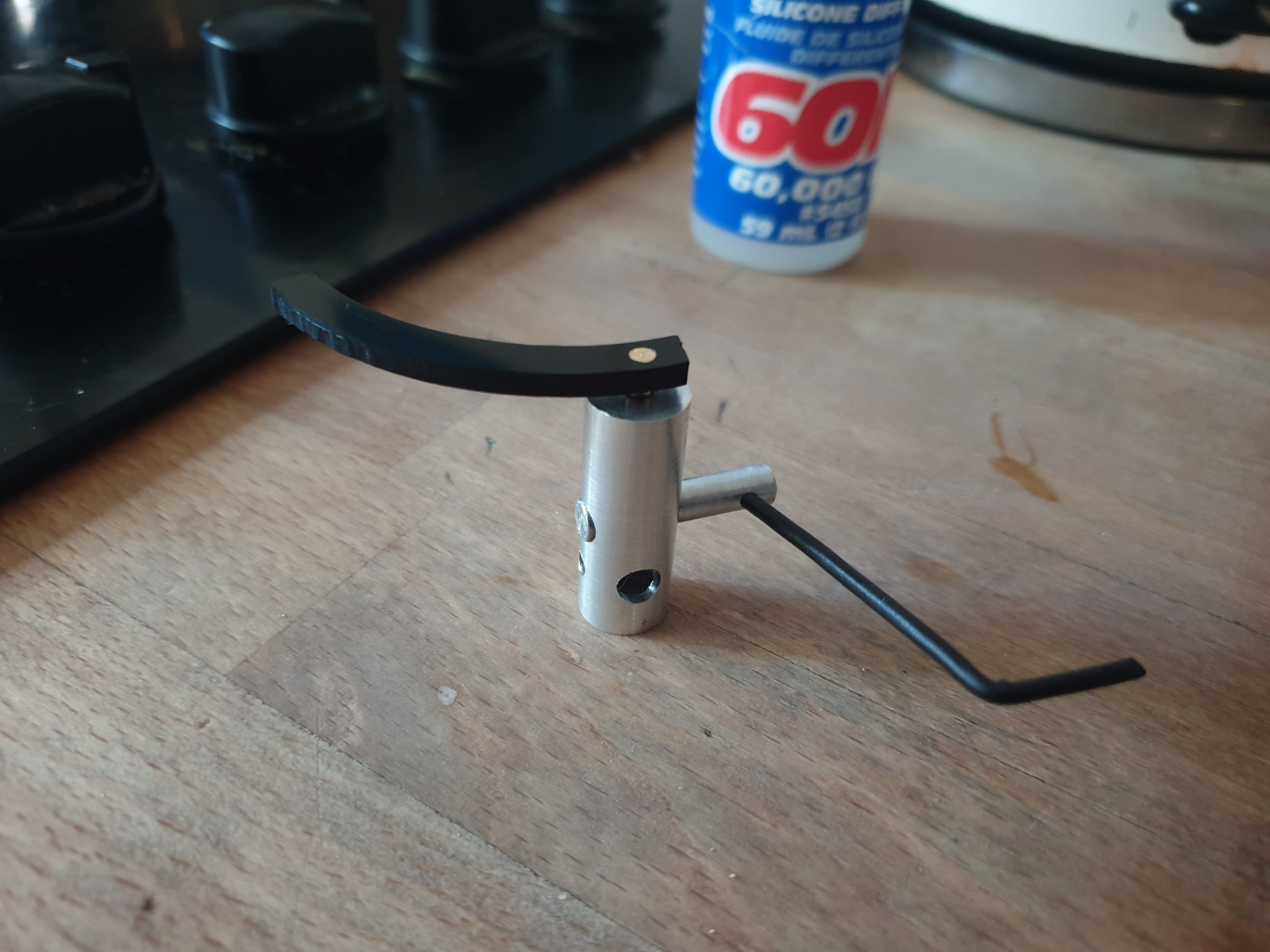 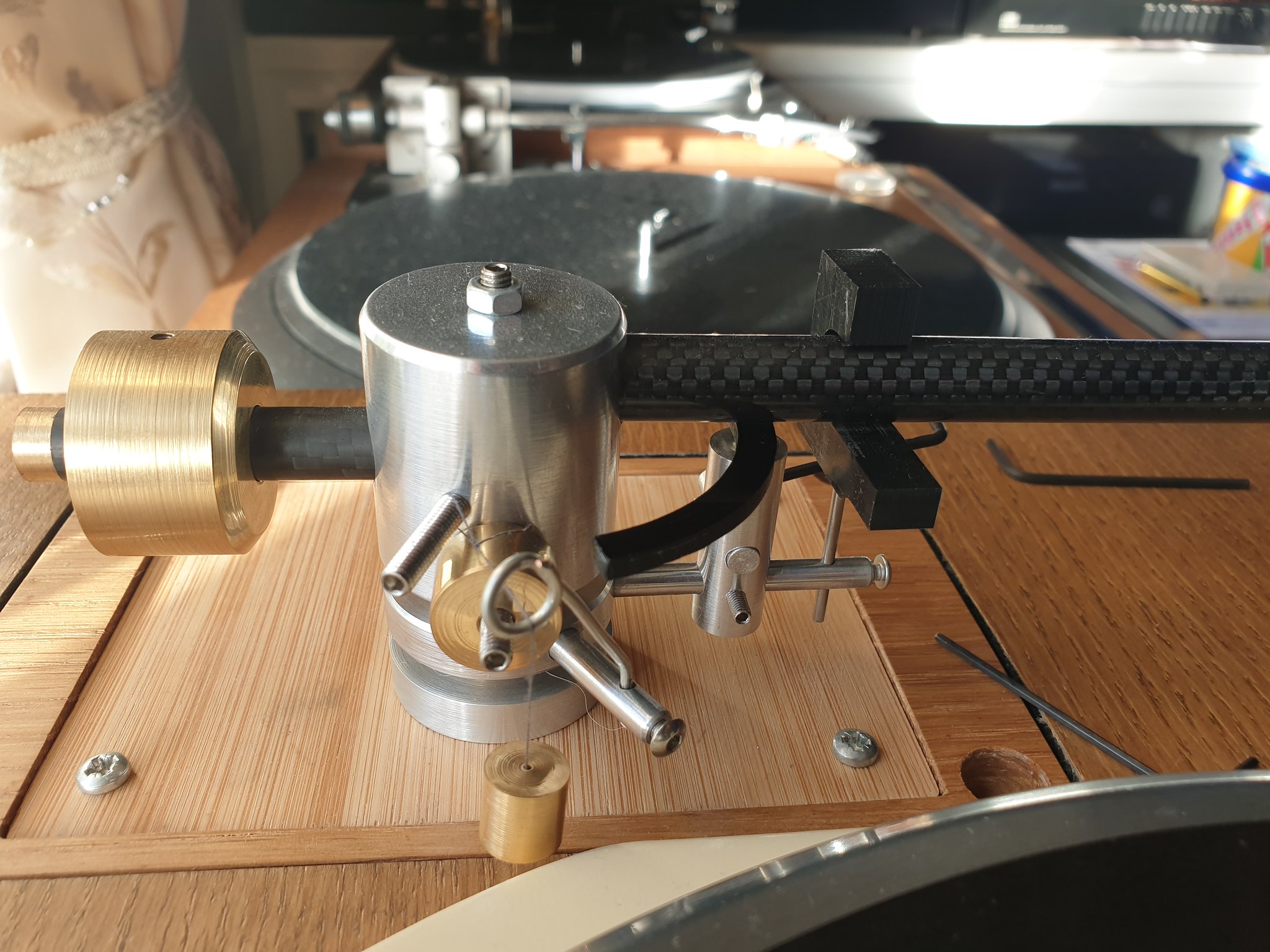 The setscrew needs to be shorter, but is fine for now 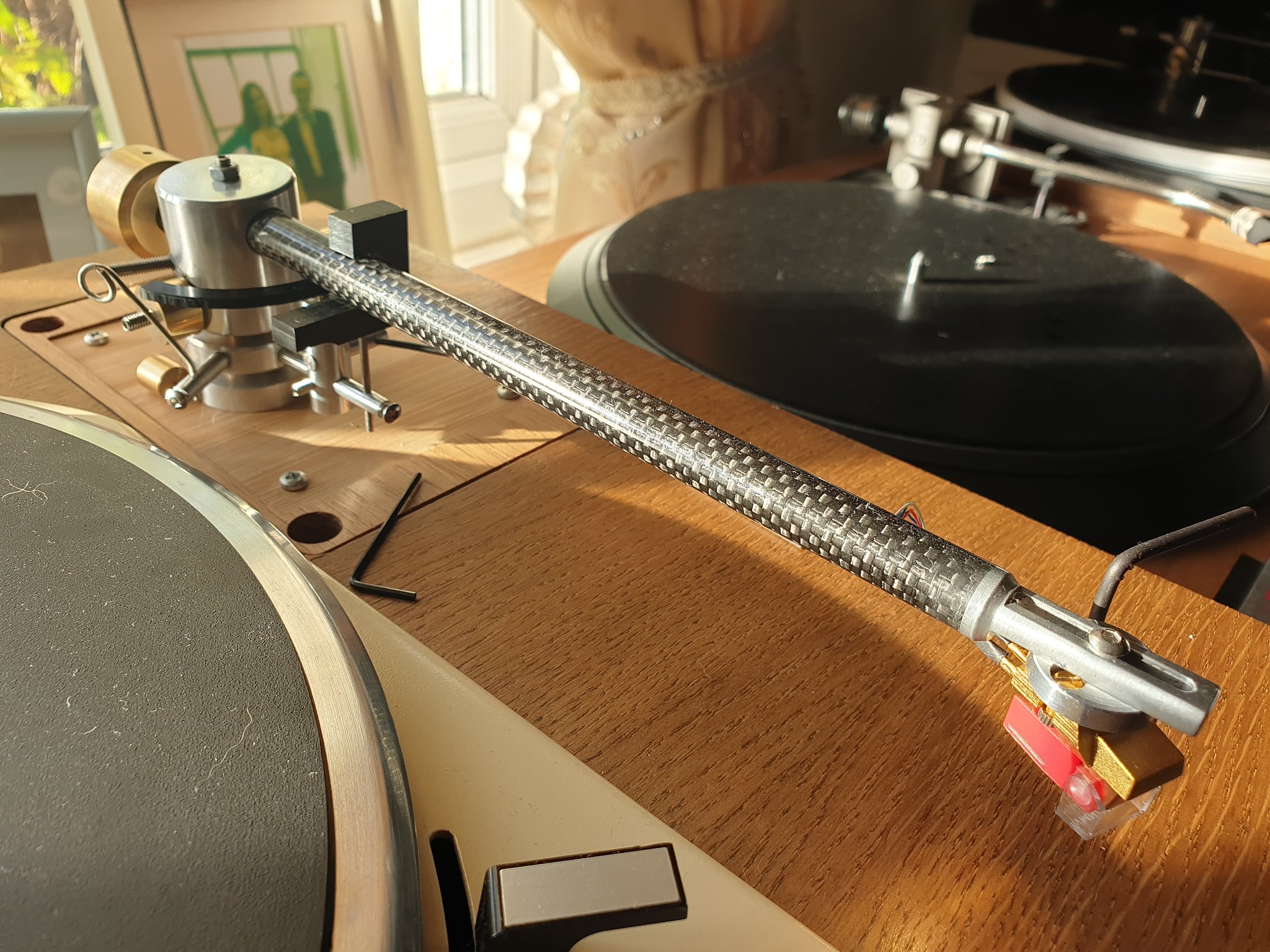 It works fine, feels a bit gritty because of the surface finish inside the housing. I should have bored it rather than just drilling it out, then it would have felt smoother, but I can live with that.

Took some working out how to make one and have it lock into position, It would have been handy if I had one off something to look at, but i havent got any arms with one on......

quite pleased with it
Also starring Rex Hamilton as Abraham Lincoln

I'm not surprised you're pleased, that's a cracking bit of work, there.
"Peridots and periwinkle, blue medallions Gilded galleons spilled across the ocean floor" ( Mitchell )
Top

Gert Lush as they say down 'ere.
Top

Just needs a bit of thin rubber on the top of the lift bar, the arm tends to move a little when dropping it down, the bias is pulling it back towards the rest
Im sure there is something suitable hanging around here somewhere
Also starring Rex Hamilton as Abraham Lincoln

This one didn't cost anything as the materials were offcuts from other things, and I could make it to fit the arm properly without bodging. I could also make it fit in with the asthetic of the arm so it looks like its supposed to be there.

So it seemed a no brainer to make one.

Improvements would be to make the body a larger diameter so I could bore out the inside surface instead of drilling it out so that the surface finish inside is much smoother, and tolerancing the piston a bit tighter.
I drilled out the body, then as an afterthough I stuck an end mill in the tailstock to square the top of the bore. This was so that the return spring had a flat surface to seat against instead of the 135 degree cone that the drill bit leaves.The end mill must have been a thou bigger than the drill I used so the bore tolerances ended up a bit looser than ideal.

What I would do now having made the process mistakes is to drill, then use the end mill again to square the bore, then bore the inside to tolerance. Make the bore 10mm instead of 8mm, then I can get the smallest boring bar I have down it which is what I should have done in the first place instead of being lazy and thinking I could save abit of time and effort. Half arsed usually doesn't work
Then make the piston to that finish tolerance instead of doing it arse backwards....
Seems silly that the lifter is the most complicated and tolerance critical bit of the entire arm...

This arm has come a long long way since that first shoddy (not in a good way) effort. S'only taken 4 and a half years......
Also starring Rex Hamilton as Abraham Lincoln

Fantastic to see youre work ethic youre effort conscentration tenacity and hand skill, youre a credit to youre friends and family and all us.
"Two things are infinite, the universe and human stupidity, and I am not yet completely sure about the universe." – Albert Einstein
Top

Paul Barker wrote: ↑Thu Nov 04, 2021 6:46 am Fantastic to see your work ethic, your effort concentration tenacity and hand skill. You're a credit to your friends and family and all us.

I must agree with Paul.

Having the lathe stuck at 500rpm because it needs a new second pulley hasnt helped the surface finish of the parts, so working around that problem has been interesting too...
Also starring Rex Hamilton as Abraham Lincoln

Finally dropped on a nice mc cartridge to use as a test cart for this arm.
So far the various versions of the arms have had a fairly wide variety of carts in them. The dv20 high output moving coil it has been developed with, the 760slc mm i broke, an ortofon 2m blue mm that peter kindly sent over for me to test with, and the grado black mi that has some lovely qualities but didn't take long to wind me up, but not a low output mc.
I have one, the at33sa, but i refuse to take it out of the air bearing arm because if i do it will take 6 months to get it back in there and set up as well as it is now. I need to get an mc in it so i can see how it reacts to one, and to see how quiet it is as the arm tube has no ground wire.
The airprodigy arm has no problem with hum and its wiring is flapping in the wind, but its not always the case.
So, ive been idly perusing the worlds largest car boot sale for a few months now hoping something suitable would show itself eventually.
It did this morning
I had a fairly specific list of requirements, something that is not particularly expensive due to it being for testing purposes, something that is of fairly average physical weight, something that tracks well, and no shonky ancient carts that have no history. It would be pointless if the cart had a knackered stylus, offset cantilever, bent cantilever, ect ect ect.
This morning an audio technica at-f7 popped up. In an unmarked sumiko hs12 headshell, it looks to be in exactly the right place in said headshell and lined up properly square to it. Looks like its been set up properly. Nice clear photos of it in the listing showing a pin straight cantilever and a clear diamond. Very clean and boxed, and shows every sign that its been looked after and not used a great deal. It has a nude elliptical on it, not a line contact stylus like everything else i have running at the moment, but other than that, which was never a prerequisite, at 110 quid it ticks every box. The sumiko is a bonus.
Ive had one of these before and it was very good in a mayware, a terminator air bearing arm and the original version of this very arm so i have a good idea of what to expect.
Hopefully the photos are not smoke and mirrors and it is as good as it looks to be.

What surprises me is the amount of old shite i have seen sell for good money over the past few months. Stuff that you wouldn't touch with a bargepole, with obvious bent cantilevers, stuff that is absolutely filthy, stuff that has obvious damage, and stuff that obviously hasnt been used in years with corrosion on pins and bodies.
Its as if people just dont know what a cart should look like, and cant tell that one is very likely knackered by its condition.
It baffles me
Also starring Rex Hamilton as Abraham Lincoln

Im rather happy with how this project turned out, and am seriously considering adding the arm to my range of things i make for people.

Id like to know wether people who have now heard it have an opinion on this, and wether people think its good enough to sit in the market for an arm?

My issue is that i cant really compare it to a current manufacture arm other than the air bearing arm i have.

I think it is good enough, but id like to see if other people have the same opinion

Thanks for any opinion, and id like to know what criticisms there are of it too to see if there are things i can address with it too.

Nobody said it was shite, so thats a good start.
Also starring Rex Hamilton as Abraham Lincoln