Love it or hate it, it just won't stop
Post Reply
528 posts

Also picked up the Rick Wakeman record that I was enjoying yesterday for mi dad.
Also starring Rex Hamilton as Abraham Lincoln

Some good stuff there - Smiths, goes without saying.
Paul Simon, that's a good collection, I love the track 'Hearts and Bones' , beautiful.
Heifetz popped up on the 'How could anyone be that good..' thread, one of the greats.
"Peridots and periwinkle, blue medallions Gilded galleons spilled across the ocean floor" ( Mitchell )
Top

Some good stuff there - Smiths, goes without saying.
Paul Simon, that's a good collection, I love the track 'Hearts and Bones' , beautiful.
Heifetz popped up on the 'How could anyone be that good..' thread, one of the greats.
"Peridots and periwinkle, blue medallions Gilded galleons spilled across the ocean floor" ( Mitchell )
Top

The entire album 'Hearts and Bones' is knockout IMO, not just that track. It used lots of (then) current 'sounds'. Its a good bridging album between 'One trick pony' (which is awethumnley brilliant and underrated (IMO)) and 'Graceland' which was quite popular IIRC.... arf!

You can hear how he went from the classic cuddly 70's singer-songwriter genre through to embracing world musics and technology in-between.
"The fat bourgeois and his doppelganger"
Top

I got it because it also has 'train in the distance' on it and it's one of my favourites.
Dont have the album with it on. Nice thing about this compilation is that it has 3 tracks a side on 2 discs, rather than jamming it all onto one disc. The sound is better on it than the earlier compilation I have called 'greatest hits ect', that has a different set of tracks so I don't mind having 2 compilations
Also starring Rex Hamilton as Abraham Lincoln

"everybody loves the sound of...."

More years ago than I care to remember, when I used to go to the track rather than being factory-based, we always had music playing in the garage through the night. It helped keep everyone (more or less) sane through the long weeks of winter testing, as we worked late into the night, to have the car ready for the next day's running.
People would bring along music, so you'd get exposed to new stuff. One time an american chap called Kurt played some music by a band he had seen live a few times, called The Fabulous Thunderbirds. Mostly blues, and they were pretty tight, with a great harmonica player/vocalist.

Fast forward 30 years or so, I decided to pop into Wallingford Oxfam to check out the vinyl. I've never found much in there - either there are some regulars who snap up anything good, or maybe the good stuff goes on Ebay.

Anyway, I spotted this

It was really cheap, plus they were having a sale, so I snapped it up. I've just played it, it might be nostalgia, but I'd forgotten just how good they were. I think its an original 1979 pressing of their debut album. Its pretty much mint, even the sleeve is good. Someone has looked after it.

Brought back some happy memories and gave me something to smile about in these troubling times.

Kurt always had a nice turn of phrase. I remember being at a typical wet winter test at Barcelona, the car hadn't run all day because of the rain. Kurt said that winter testing was like standing in a shower fully clothed, ripping up $100 bills.

Kurt, wherever you are, stay safe mate. Off to have another listen now.
Top

Only received off ramp so far, patience is a virtue in these wierd times
Good things come to those who wait
Also starring Rex Hamilton as Abraham Lincoln

Got stage by Bowie and think its a very good, warts and all album.
Top

If anyone needs a good original copy of 'Split' by the Groundhogs , there are three in the shop in Keswick !
"Peridots and periwinkle, blue medallions Gilded galleons spilled across the ocean floor" ( Mitchell )
Top 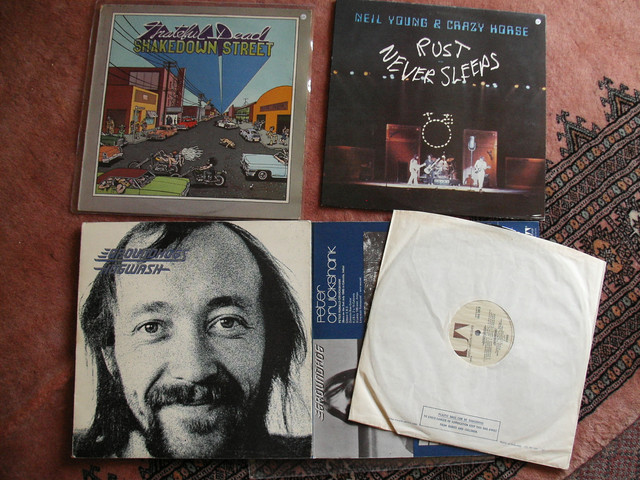 Dont know if this is of interest to anyone, but placebo are selling this 4 lp set at a 75% discount for this weekend,
25 quid instead of 100, so i bought one

I know placebo are something of a niche band for most people on here, but perhaps its of interest to someone
Also starring Rex Hamilton as Abraham Lincoln