For the three and more legged things
Post Reply
21 posts

Well, after completing the Transporter "upgrades" to my liking, I started to get an itchy soldering iron again and needed another "fix" of noxious solder fumes, millions of pieces of cut off component leads all over the floor and the frustration of trying to buy obsolete components...

Since I now have a 2nd system consisting of the Transporter and headphone amp and I also have some 25 year old Ruark Tallisman II speakers I thought I'd make a power amp to fill the gap. After looking at several DIY ideas online I stumbled on the very good book by Mr Douglas Self.

I'm not going to say I understand it all!

However, it was a great read and swayed me to look up his website. Now it turns out that the company that used to back up his designs with kits, etc, is no more but Douglas himself does have some pcbs left, so I took the plunge and purchased the Trimodal amp pcbs and the protection pcb direct from the man himself. 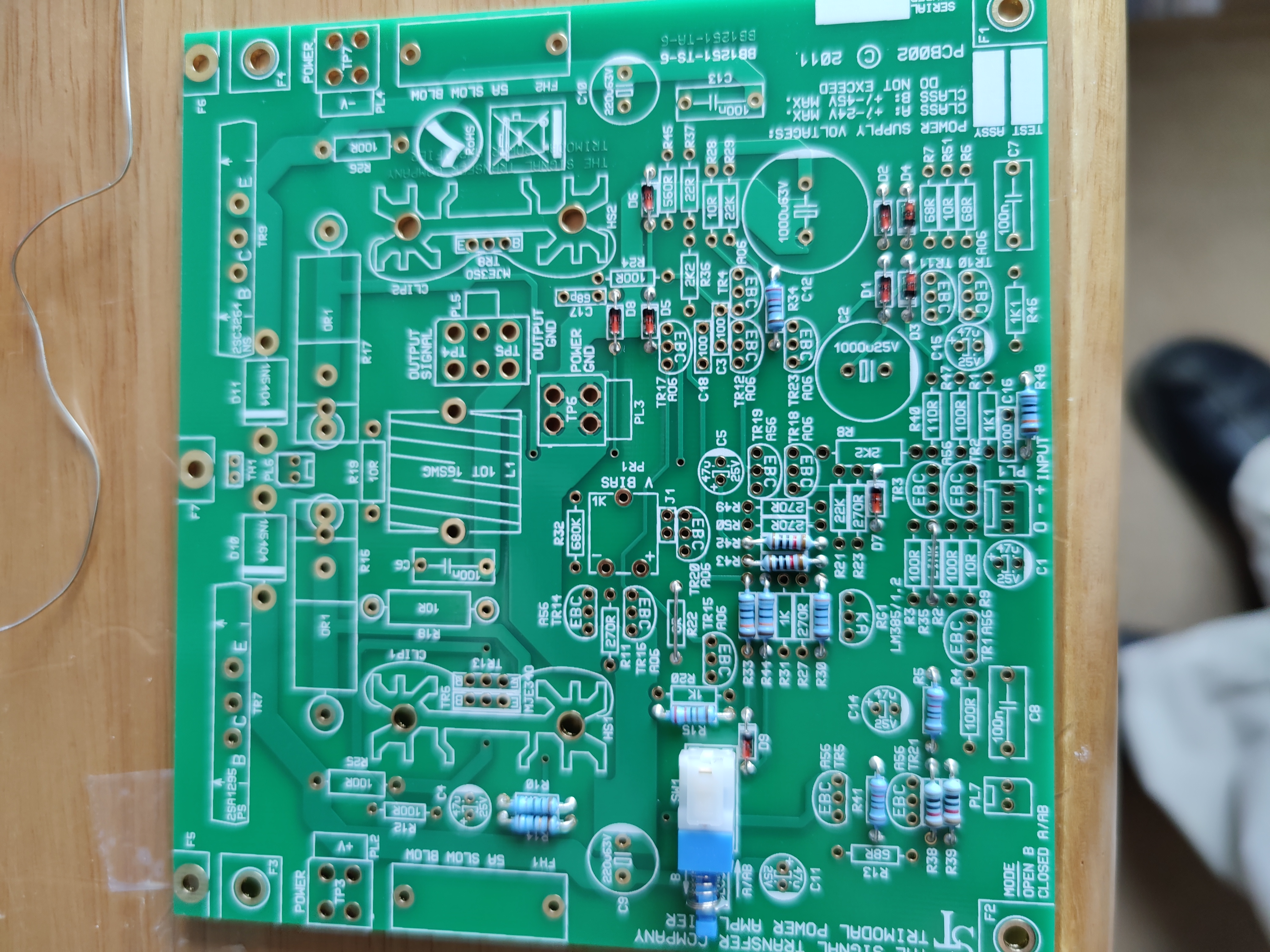 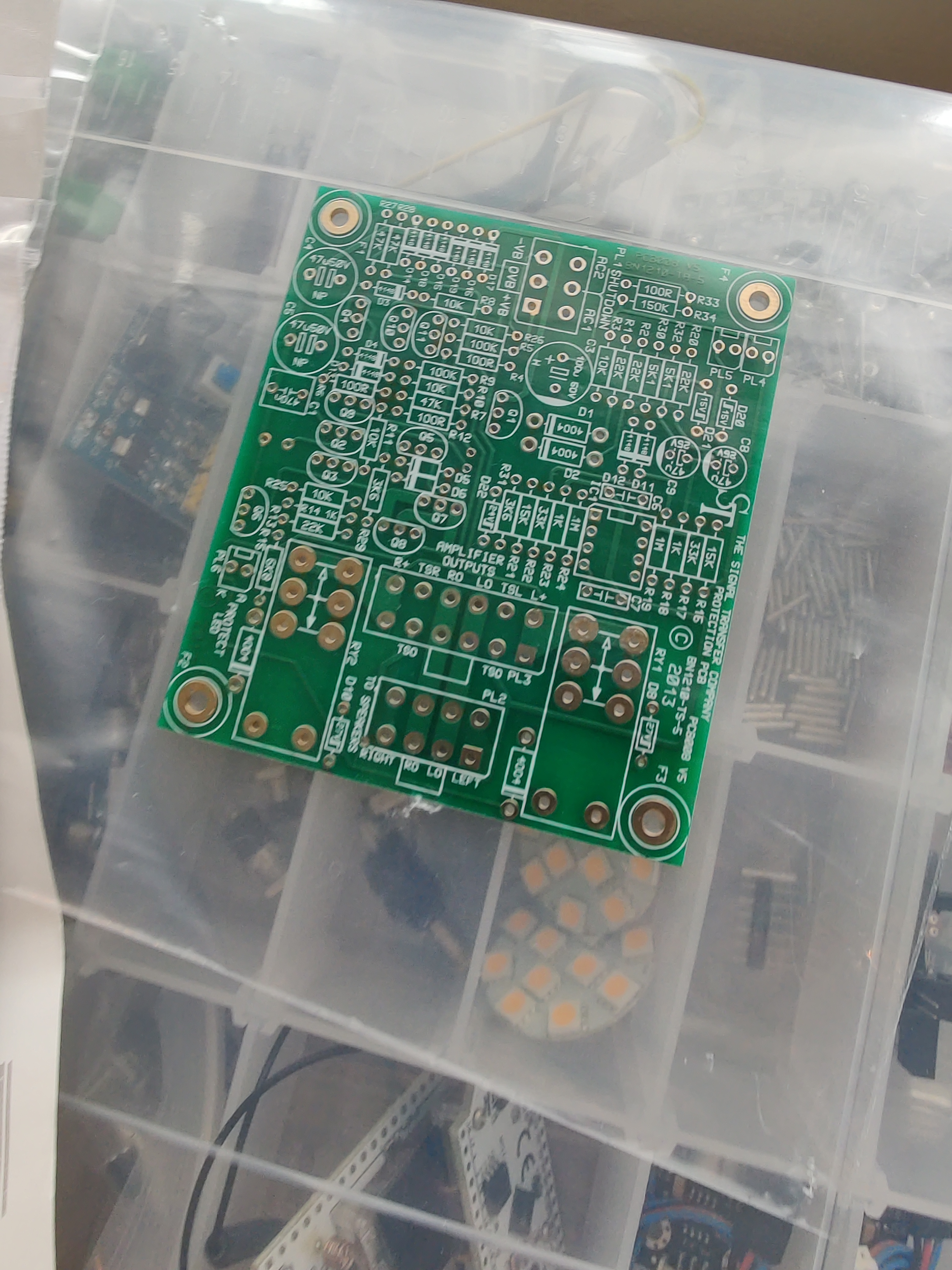 The boards are very nicely made indeed.

Or at least began, the amp is now almost complete and works a treat! If anyone would like more photos of the build and final result I will carry on, if I'm not boring you!

Well, since there have not been any replies I'm just going to keep on talking and hope someone is watching!

So, the pcbs arrived, along with a nice detailed instruction manual on the design and a list of parts, most of which including part numbers for Farnell, RS or Rapid. Quite a few of the components listed were obsolete and so I had to take to Ebay, as you do, and find someone who had them. It took a while to get everything required. 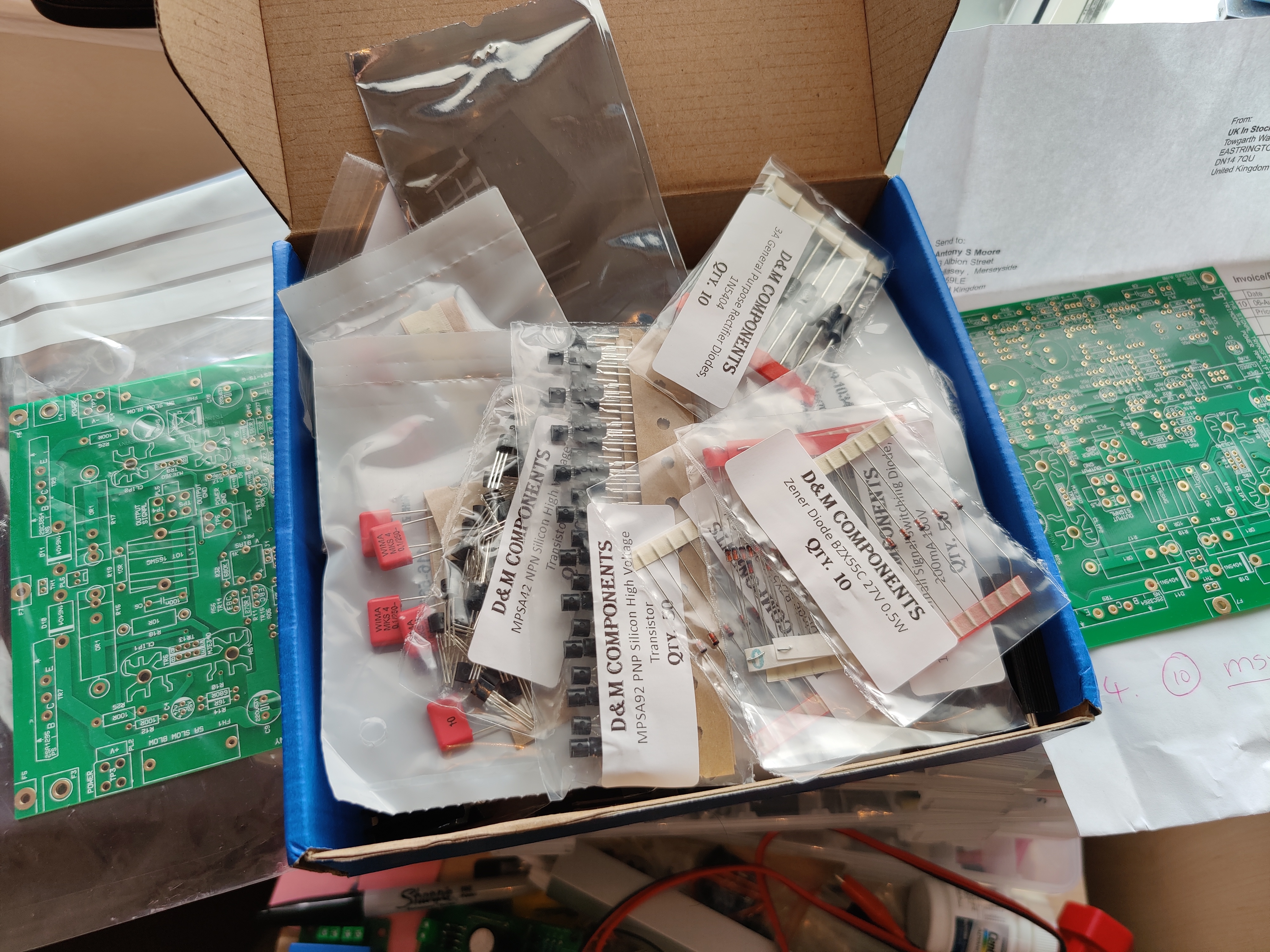 The core of the beast 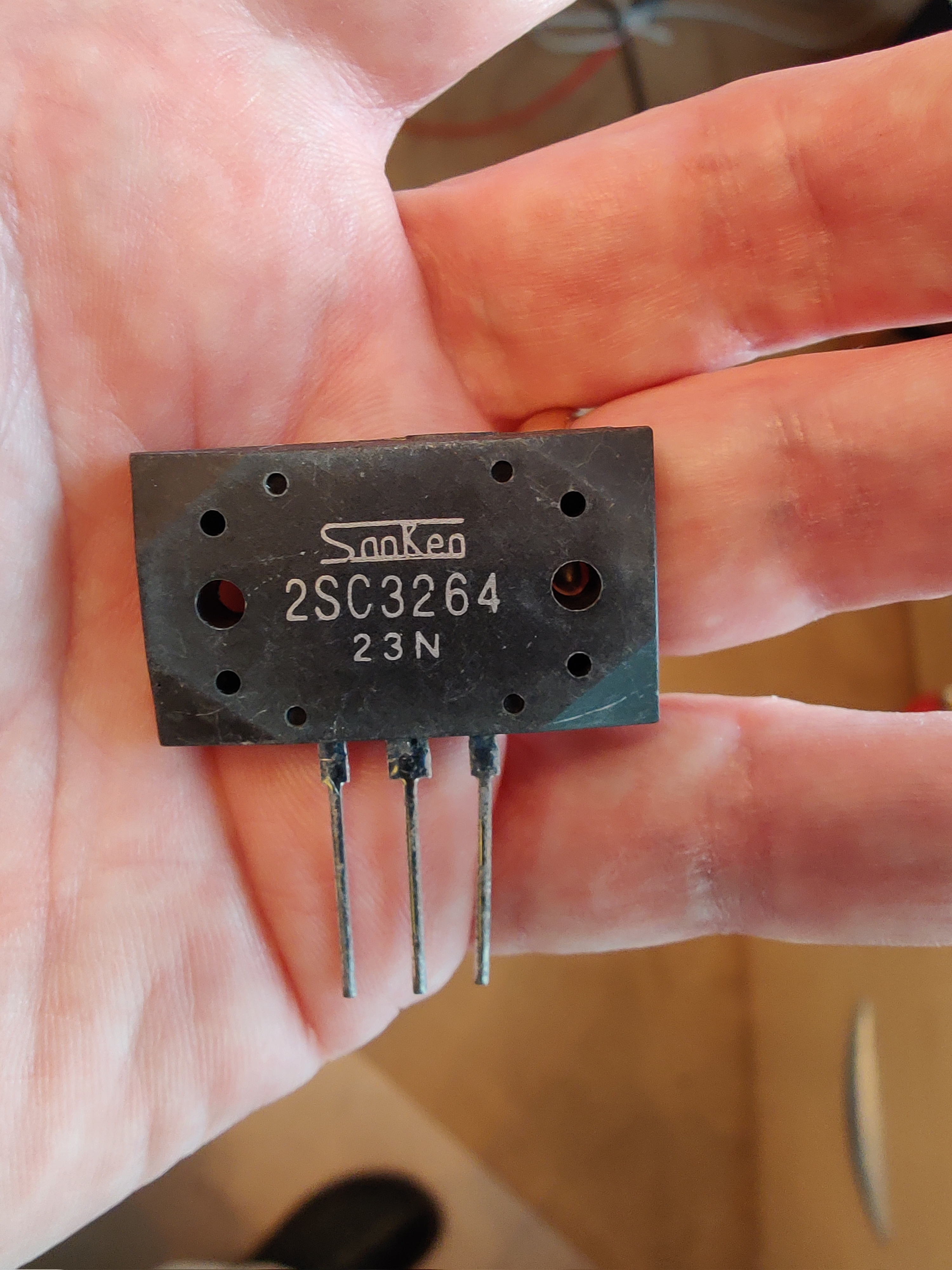 The next stage was a case, to set the build parameters in terms of layout and size. I found a really nice case on Ebay from China: 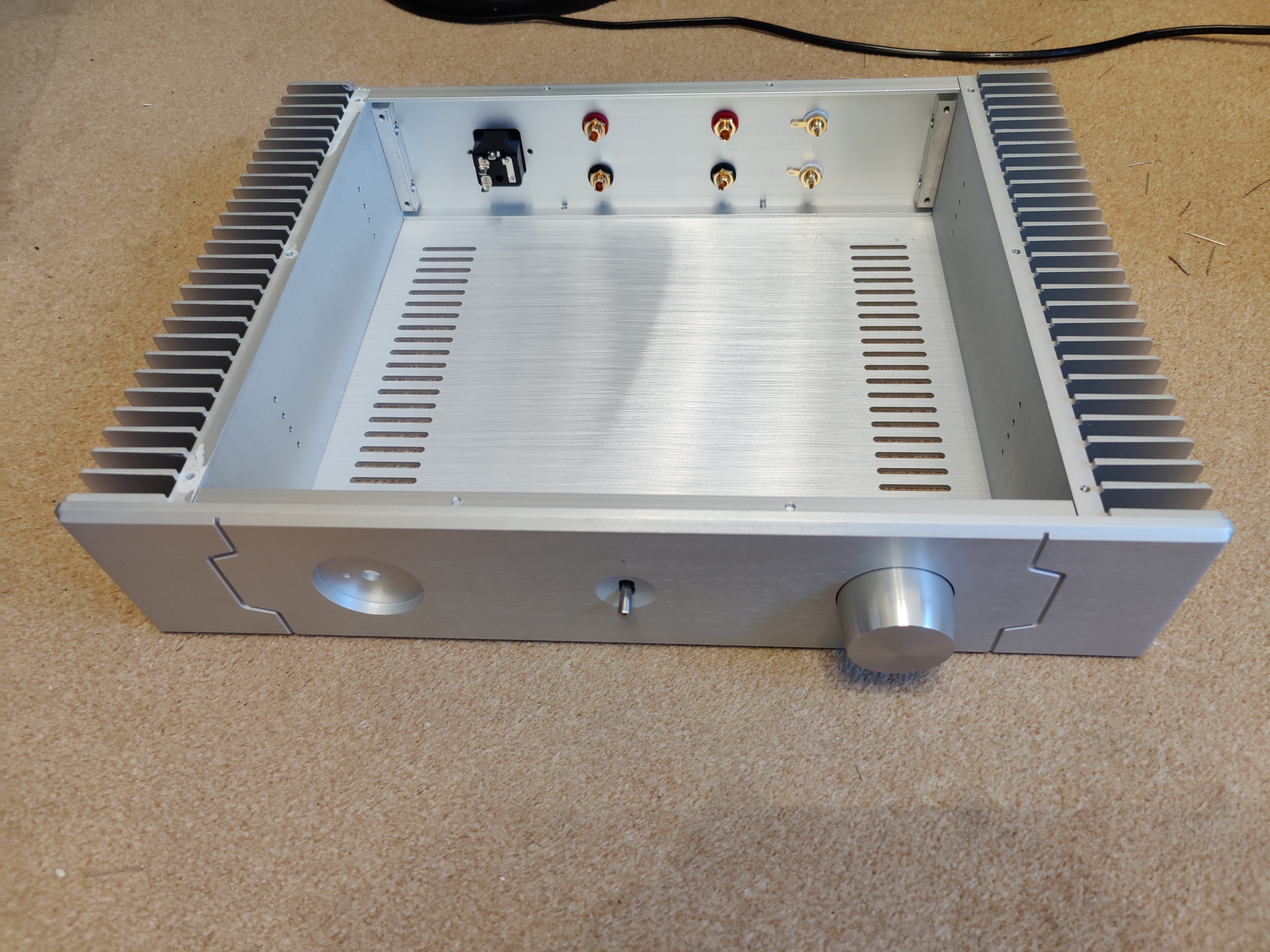 Really just the job although it was going to be a tight squeeze to get everything in. Next up was a PCB from jlcpcb for the power supply rectifier and capacitors, I decided to go with 60,000uF just to be sure, which turned out to be a very tight squeeze. 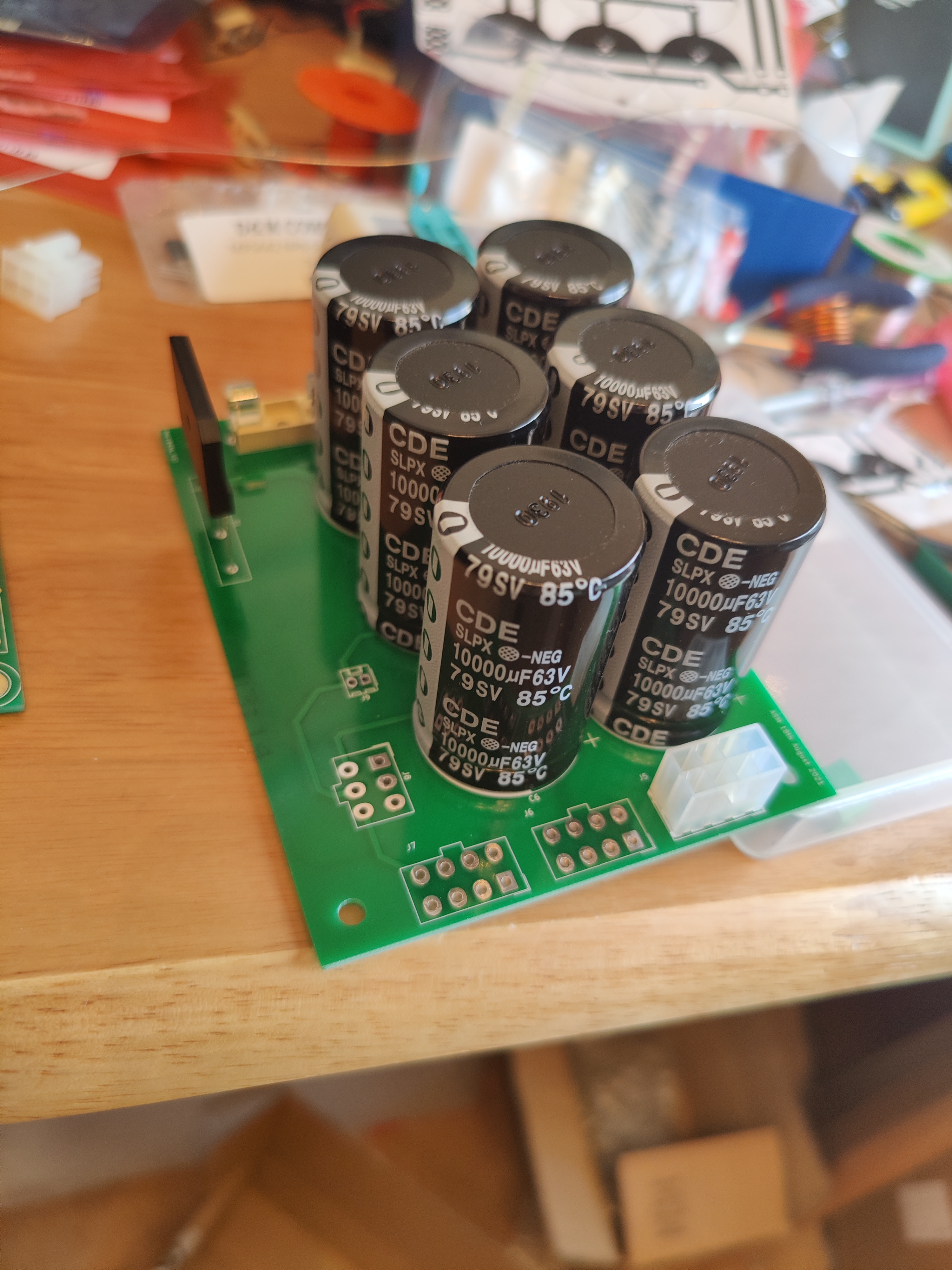 This is not the final pcb actually, I made another one where the rectifier was able to fit in better.

The amp design calls for some aluminium bar for holding the power transistors but Douglas didn't have any more of those ready made so I had to order some bar and cut/drill and tap it to fix on the transistors and thermistors and fit that to the case heatsinks. 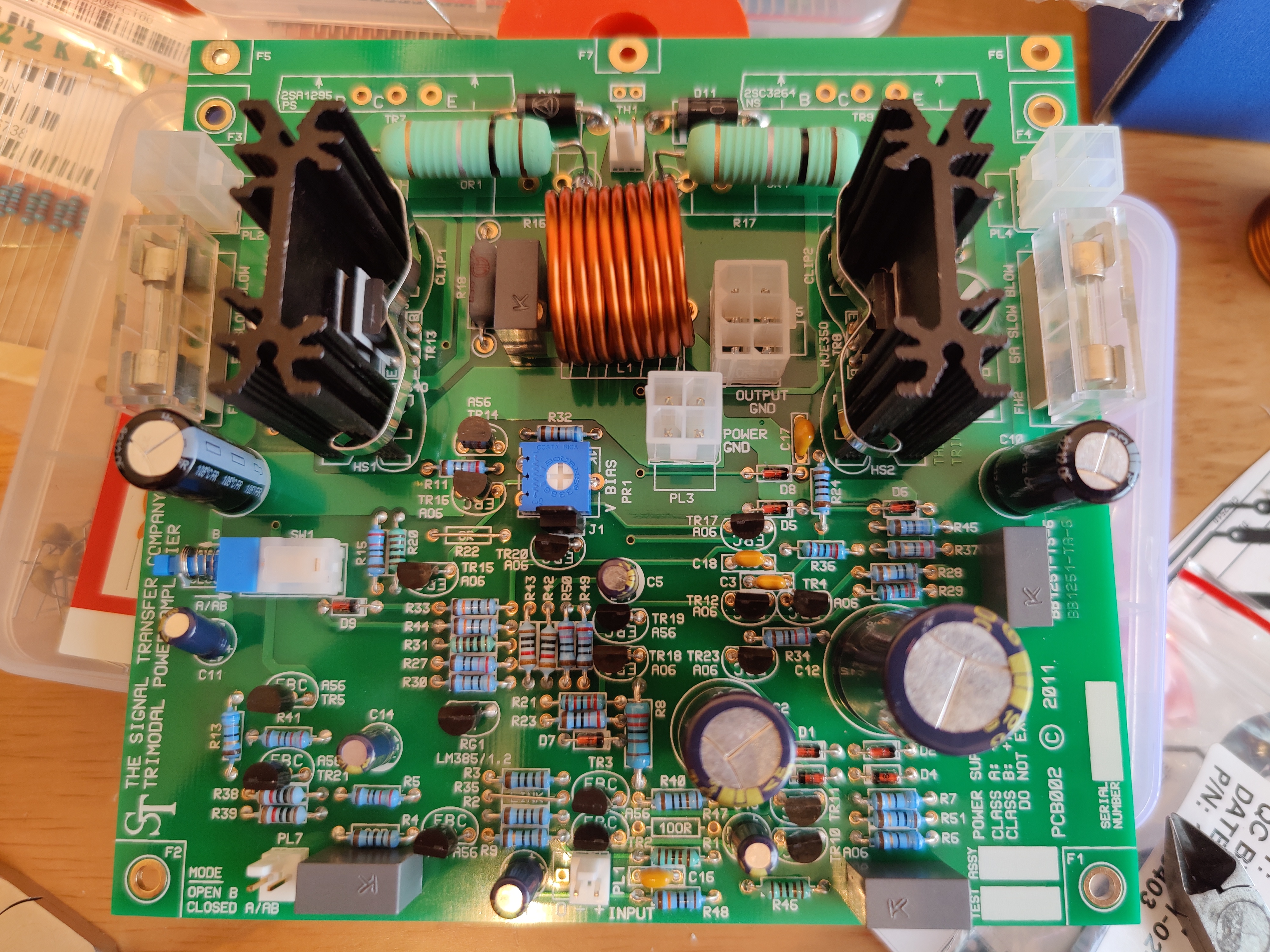 This is one channel almost complete. 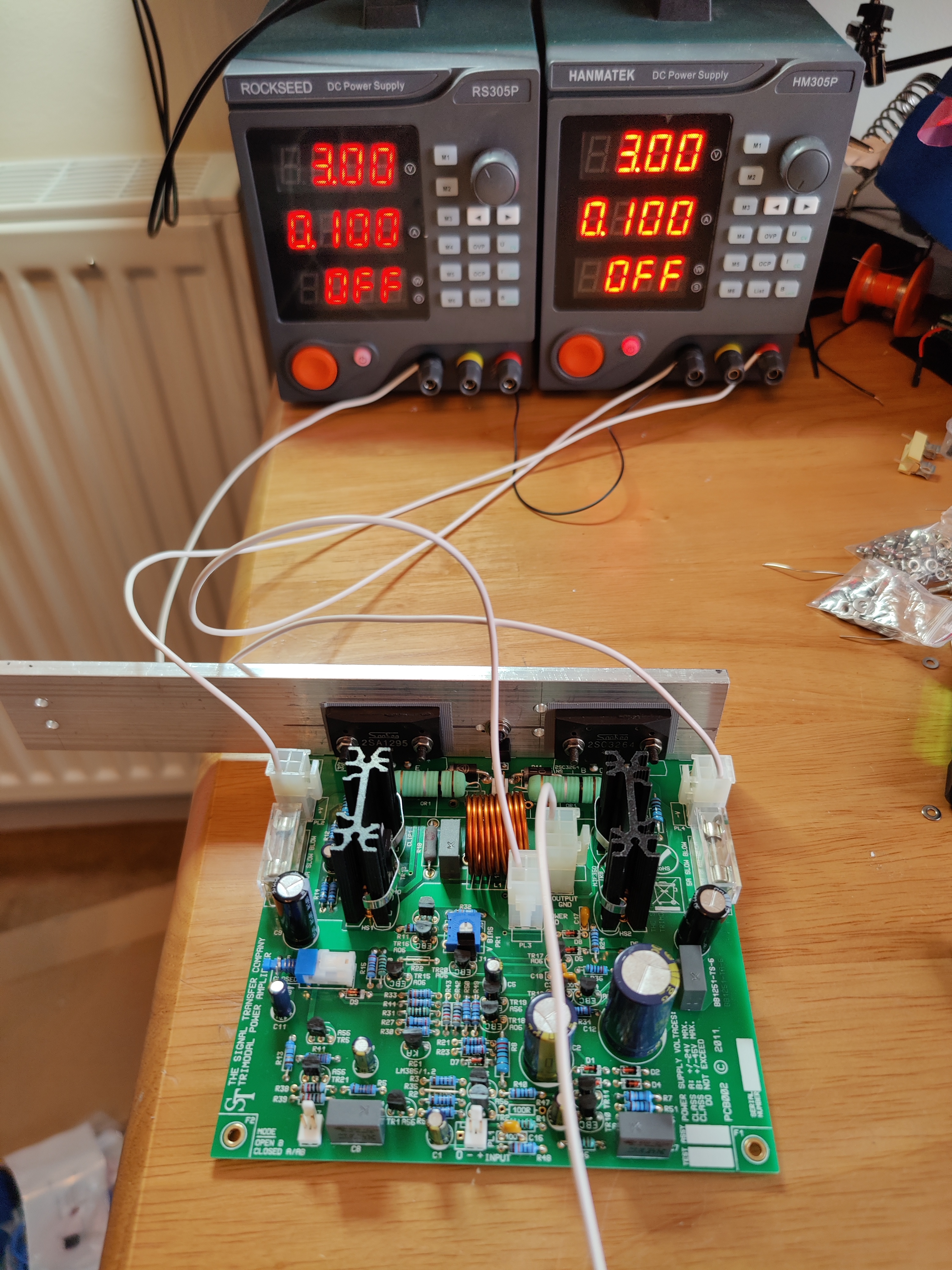 Starting to come together: 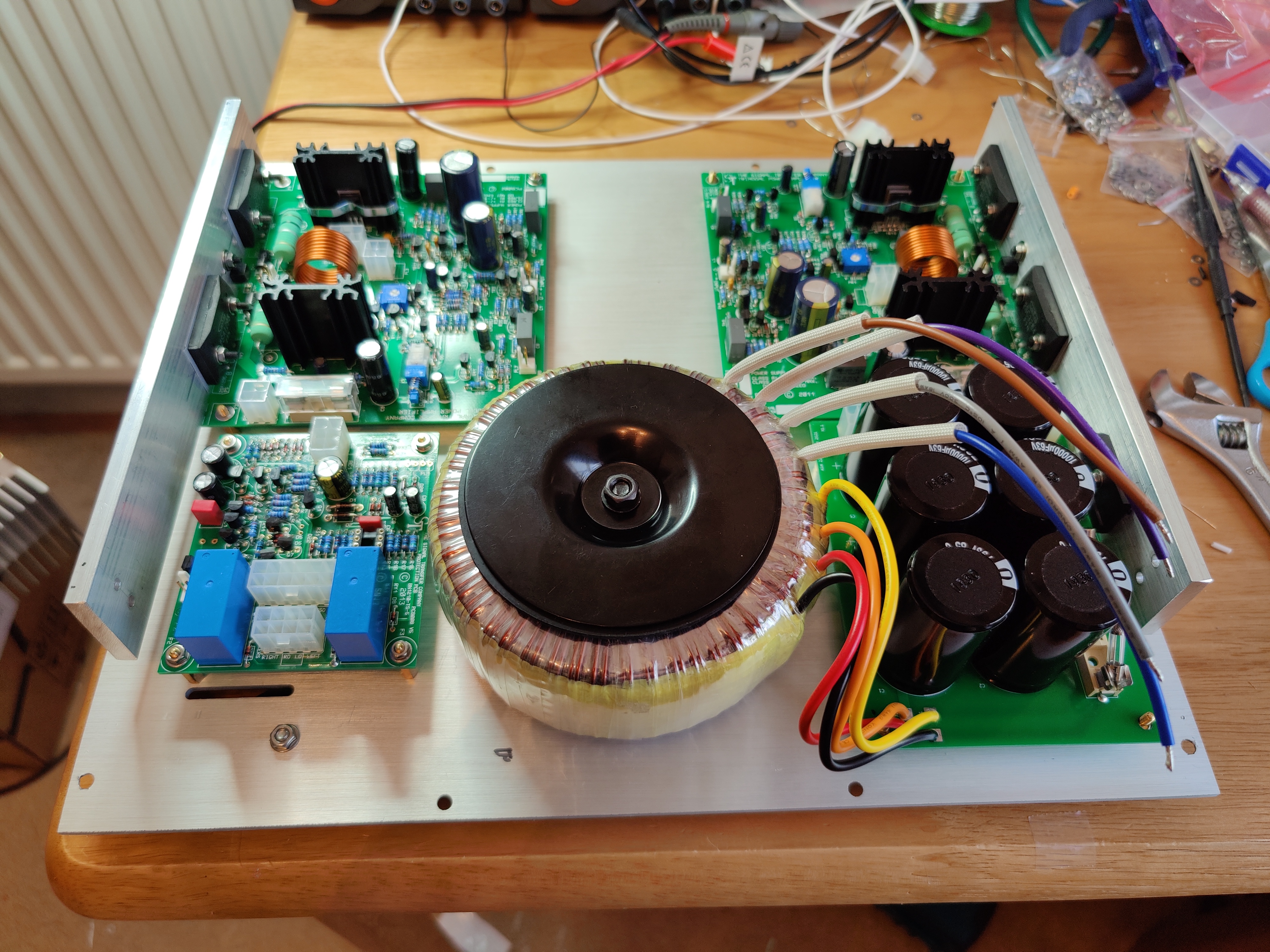 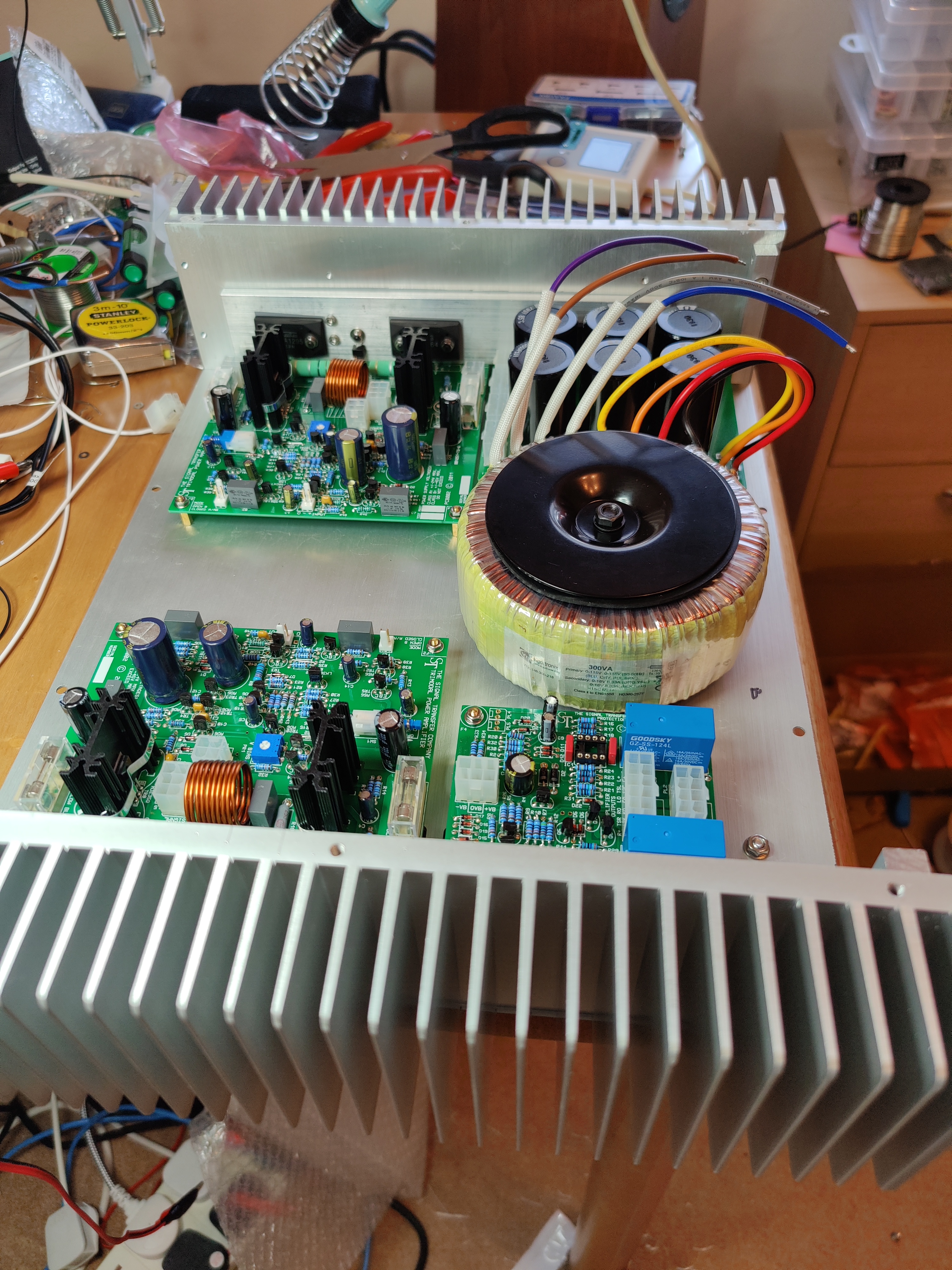 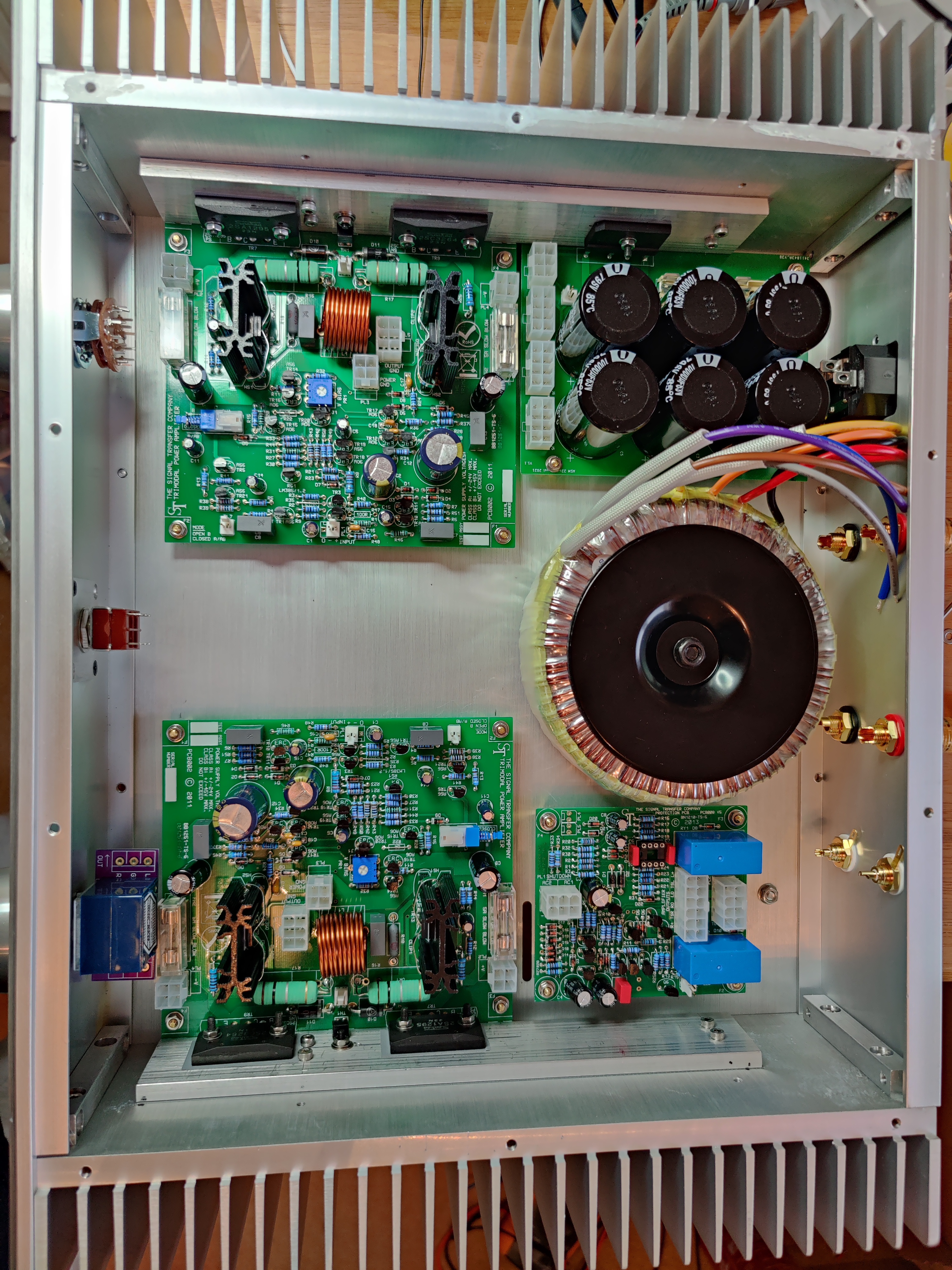 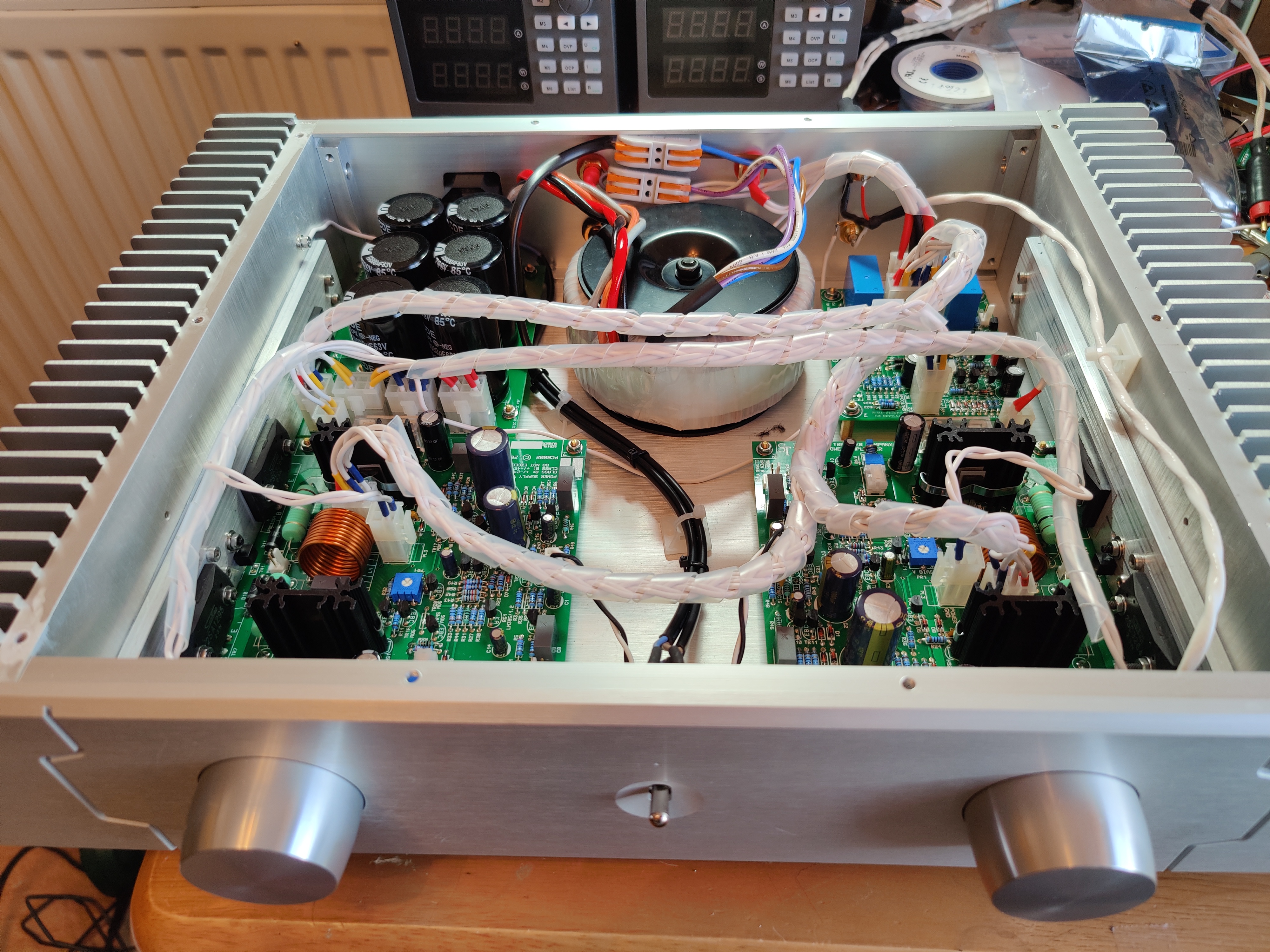 I am going to use the lefthand knob as a mode switch to change between class A/AB and class B. The power LED is 2 colour so I will wire it so that it shows red for class A and green for B. Or as Douglas refers to them, Summer and Winter modes.

I hoped to complete the wiring today but I found out that the crimps I have for the Molex KK254 shells are the wrong type so it'll have to wait for the RS guy!
Top

Do you have a link to the case?
Top

Nicely done.
Little known fact, coherent thought can destructively interfere with itself leaving no thought at all, that’s why I prefer incoherent thought.
Top

I've been out all day so just caught up with this.

Do you have a link to the case?

I've bought from this seller previously, very fast shipping although it does cost quite a bit for shipping. The packaging was fabulous though, no damage at all and the hardware was all there and screws fitted well.
Last edited by Tony Moore on Sun Sep 12, 2021 8:35 pm, edited 1 time in total.
Top

My diyery is fully virtual at the moment so enjoying your thread. Impressive specs.

You must be a perfectionist to get another pcb made coz something a bit tight. Impressive. Turnaround must be quick?
https://izzy-wizzy.com/
Top

. I just noticed you are using an Alps Blue.
Little known fact, coherent thought can destructively interfere with itself leaving no thought at all, that’s why I prefer incoherent thought.
Top

How does it sound?

“The sound you love today may not be the sound you love tomorrow, and with tube circuits you can continually retune your gear to what reflects your current vibe...so you can get even down deeper into your truth.” (Harvey Rosenburg.)
Top

. I just noticed you are using an Alps Blue.

Haha, busted! There's my next upgrade then.

How does it sound?

At the moment I still have some work to do on it to complete the mode selection and power LED so it is not in a position to really set up properly but from what I've heard so far the sound is very detailed, plenty of bass and imaging is good. Completely hum free too which is a bonus.

I will report back again once I've got the amp and speakers set up properly and with something other than bellwire for speaker cables!

Yay! I get a "shoddy"! The ultimate praise.