I'm just curious what people use, and if there are any useful observations.

I tried designspark a few years ago and very quickly got confused and went back to drilling paxolin.
I've decided to have another go and I'm currently trying kicad, hoping I'll have more patience....we'll see
There's nowhere you can be that isn't where you're meant to be
Top

#2 Re: what pcb design software

I use eagle. Its all down to the availability and accuracy of part libraries.
Little known fact, coherent thought can destructively interfere with itself leaving no thought at all, that’s why I prefer incoherent thought.
Top

#3 Re: what pcb design software

For really basic stuff I use an old copy of Copper Connection but I'm trying to pick up KiCAD. I chose it because its free and popular but primarily because there's a guy at work who's a bit of a whizz on it so help is at hand.
Top

#4 Re: what pcb design software

I couldn't get kicad to work......3 attempts to download and install and it keeps locking up win10.
I then tried zenit suite and that wouldn't run either...
I'm back to designspark...but I can't get the transition from circuit to pcb...although I've put in the RS part numbers on the component values it still insists that it can't find the actual part descriptions.....

bit of a bad day on the pcb design front...tomorrow will be better
There's nowhere you can be that isn't where you're meant to be
Top

#5 Re: what pcb design software

I've been very slow to pick this up...and appreciate I've only scratched the surface, but I have got somewhere, I think.

I got some results with designspark, having discovered the beauty of 'library loader' which transfers part details to the circuit builder. But... I was thrown by the transfer of schematic to pcb...designspark puts tracks in where they deffo don't belong, so it requires an eagle eye to check what it's doing.

After spending some time looking at the wrong track scenario I tried kicad one more time...I down loaded what it said was the last stable release and installed it and .....it locked up straightaway when I pressed the schematic button. It transpires there are legions of people reporting problems with kicad, mainly to do with part libraries...Then I had a look at eagle...wow, thats a whole nuther learning curve........I gave up and went back to designspark.

After manually editing the pcb layout to remove errored tracks and install correct ones I ended up with a workable set of gerber files. I double checked with an independent gerber viewer and all looks good.....

sailing into the future.....
There's nowhere you can be that isn't where you're meant to be
Top

#6 Re: what pcb design software

boards arrived last Thursday, which I don't suppose is too bad considering I opted for the cheap postage. 18 days from submit gerber files to receipt of boards. Quality looks fab and the circuits check out....not bad for £5 for 5 boards plus £8 postage.

One thing though, the name text and the connection orientation text were missing from the finished boards. The component names seem to be in the top silkscreen layer but the text seems to be in the top documentation layer. The top documentation layer seems to have been missed, although it was sent in the zip pack. Anybody know what the difference between the 2 layers is, and what the trick is to get text printed on the board?
There's nowhere you can be that isn't where you're meant to be
Top

#7 Re: what pcb design software

Somewhere on the PCB makers site there should be docs that say what layers get used for the top silkscreen, and you need to either merge the layers in your design, or swap them (don't know how as I don't use designspark).
Little known fact, coherent thought can destructively interfere with itself leaving no thought at all, that’s why I prefer incoherent thought.
Top

#8 Re: what pcb design software

Another vote for KiCad here. It's a little quirky but once you get used to it...

A board from JLC Pcb: 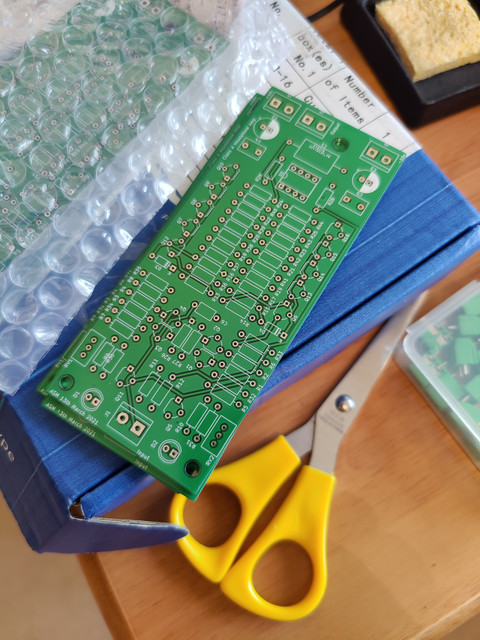 #9 Re: what pcb design software

I have been toying with the idea of migrating to Kicad for a long time. The up coming version 6 is said to fix many of the quirks of the old version and make it much more usable.

For more than 10 years I have been using freePCB. It is a very simple and straightforward PCB layout tool. Most of the boards I design are fairly simple double sided so the schematic is on paper and in my head when I track the board. If you use any PCB layout tool for any length of time you will end up creating a lot of your own footprints. The standard libraries just don't cover many of the things I need. So no matter which software you choose for PCB layout you need to be prepared to invest time and effort in creating your own footprints. This is one of the main reasons I am reluctant to change to another package.

#10 Re: what pcb design software

I created great and in my opinion really complex circuits, digital and analog for tube amps, all with KiCad. Until now there is no need to look for different Software, at least not for diy project. Really great stuff, I'm using newest Version.
Top
Post Reply
10 posts • Page 1 of 1