Subjects that don't have their own home
Post Reply
68 posts

I thought you’d enjoy it! R-to-Rs are lovely things to wort on when they’re not all computerised.
Top

What speed is this tape playing at, do you know?

There is a slower speed also, but strictly for voice - quality is not a lot, on a par with AM radio. Alright for dictation of if you got hours of speeches or lectures to record.

The tape that came with it is recorded at 7.5ips. didnt find any solenoids in it mike, all the functions in it are completely mechanical, i must admit i am surprised at how nice it sounds.
I was planning to use it to record at 7.5ips, (if it records, havent tested that yet) ive had to buy some long cables to connect it up which havent come yet. Had to pinch some leads off one of the turntables and put it ontop of the speaker to test playback
It didnt seem bothered by being on the top of it while playing though.
I need to get some more tapes, im not sure i want to record over the tape it came with because i see it as a little piece of whoever recorded it. It gave someone some joy back in 1973 or whenever they put it together

No don't wipe that!

Yes I noticed that when you explained before. So we now know what the clonk was.

The Akai has a socking great one to close the capstan roller, and it has a holding winding to reduce power once engaged. The main winding is switched out by a micro-switch. Each spool carrier has a direct drive motor under it that does winding and back tension for each. I think they run off the mains through dropper resistors. The machine can play and record in both directions, and so it has auto-reverse. Capstan motor (also reversible) has electronic speed control that is done with a phase-locked loop. Akai succeeded in avoiding belts and rubber idlers on this one. Except the tape counter which doesn't work at the moment, 'cause belt is knackered.
"Entrenched convictions cannot be changed by facts." – Dick Francis
Top

Yep i was looking at it on your site the other day Mike, it looks like a beast!

It records very nicely, i had a play with it, recorded a track from a cd and it sounds pretty much identical, perhaps adds abit of tape character to it.

I then couldn't think what to record, so son no 2 told me to find a track called bfg division by mick gordon off the soundtrack to doom 2016 game. Usually you dont really hear the soundtrack too much on that game, youre too busy shooting demons in the face

Found it on Youtube, and plugged the phone into the switch box with a 3.5mm jack to 2 phono lead, and monitored it first before recording it. Bloody christ!
Good job, the meters went off the scale.
Its a beastly heavy metal track.

Its fab actually, i like abit of heavy metal every now and then

It dint half sound good too.
Very pleased with that

And i can get the doom 2016 soundtrack on vinyl, so i can clear the room at owston in record time

Heres the track for anyone who wants to make their ears bleed. Theres a heck of alot in it, much more than i thought from playing the game 5 years ago

At least son likes this and not steps or something, i can live with that
Also starring Rex Hamilton as Abraham Lincoln

Here is a R3 program for you then.

https://www.bbc.co.uk/programmes/m0009rfn
Little known fact, coherent thought can destructively interfere with itself leaving no thought at all, that’s why I prefer incoherent thought.
Top

Ta for that nick, ive had a listen to fhe first few of the podcasts
Theres a good number of game soundtracks that are etched into my mind, halo, metal gear solid, dark souls, final fantasy, silent hill to name a few, ill have to revisit them.
Maybe not silent hill though, that game was blummin terrifying
Also starring Rex Hamilton as Abraham Lincoln

Won some tapes and a take up reel on ebay, 3 7" tapes, and and 4 of 5" ones.
Lucky, because it turns out that the take up reel is a sony
R-7MB which is the original reel that the deck would have come with. Nice!
Also starring Rex Hamilton as Abraham Lincoln

Got the tapes and the original Sony take up reel through the post this afternoon.

Cleaned the take up reel off with a magic eraser and some water, which came up lovey.

I then started to work my way through the tapes, and have a listen to what was on them.

I came across one marked BBC R3 sounds interesting review of 1977.

My blummin jaw hit the floor at the sound quality of the recording. I had to do an auditory double take....

Abit perplexed, I rang mi dad up to ask wether r3 quality was stupidly good in the late 70s.....

I'm not kidding, I can't quite believe how a 43 year old recording of a radio broadcast could sound so bloody good

edit: replaced picture with a better one that doesn't have a bloody readable bank card in it.......... idiot... 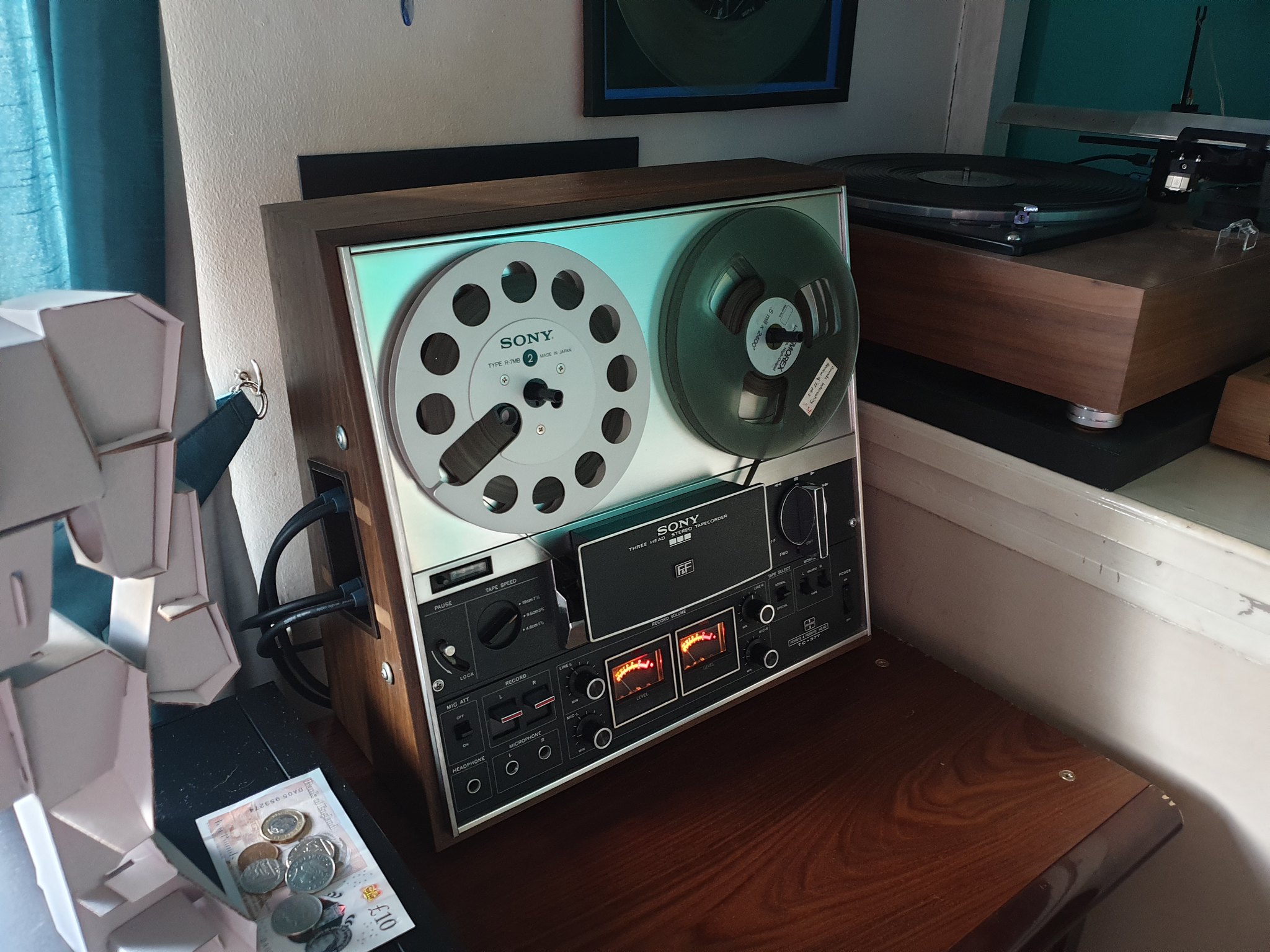 Have you tried listening to R3 with a good tuner?
Little known fact, coherent thought can destructively interfere with itself leaving no thought at all, that’s why I prefer incoherent thought.
Top

No I must admit i've only ever had an ancient inherited arcam alpha tuner and a rotel ra222 tuner. That was a long time ago
Also starring Rex Hamilton as Abraham Lincoln