what are you doing ?

Subjects that don't have their own home
Post Reply
803 posts

I don't know about you lot, but I'm already fed up and pissed off with being stuck inside these 4 walls.
I suspect this is a prevalent sentiment.
So what are you doing ?
There are a million keyboard warriors on the interweb tapping and moaning and whining about the situation, and accomplishing the square root of F/A in doing so, other than to contribute to the rising tension in the country. and wind up others. and propogate whatever rumour about this is doing the rounds on social media.
well sod that, I have not been on any sites other than this one and hfs, and to check in each day on the bbc site after boris the bullet dodger has made his daily proclamation to "do as you are bloodywell told and stay the hell away from anything breathing".

Instead of whingeing, and constant internet surfing to invite on myself as much stress as is humanly possible without exploding, I have done 'stuff'.

amongst other things, I have had a skip and removed every little thing from the garden that could be construed as 'crap'. filled a 4 ton skip, so there was alot. and ended up with backache.....

gone through all cupboards and drawers and little places were screwdrivers/spanners/small tools end up and put them all in the correct toolboxes. of which i have many

pulled out the entire hifi for the first time in years and cleaned all the accumulated dust ect, and given them a once over with a cloth, abit of deoxit here and there then put it all back. cathartic for some reason.

did the same with the telly and its associated stuff like the tv box ect. That was worse. alot worse.

washed every bit of clothing ect that needed doing. those of you with kids will know that blinding joy when you see the bottom of the washing basket for the first time in 12 years.

read a couple of books i have had for years. I recommend hi fidelity by nick hornby. and a load of biographies of various musicians. and mclarens ayrton senna book.

squared the kids away with a study plan. there were fisticuffs.

built up another lenco 75 motor unit 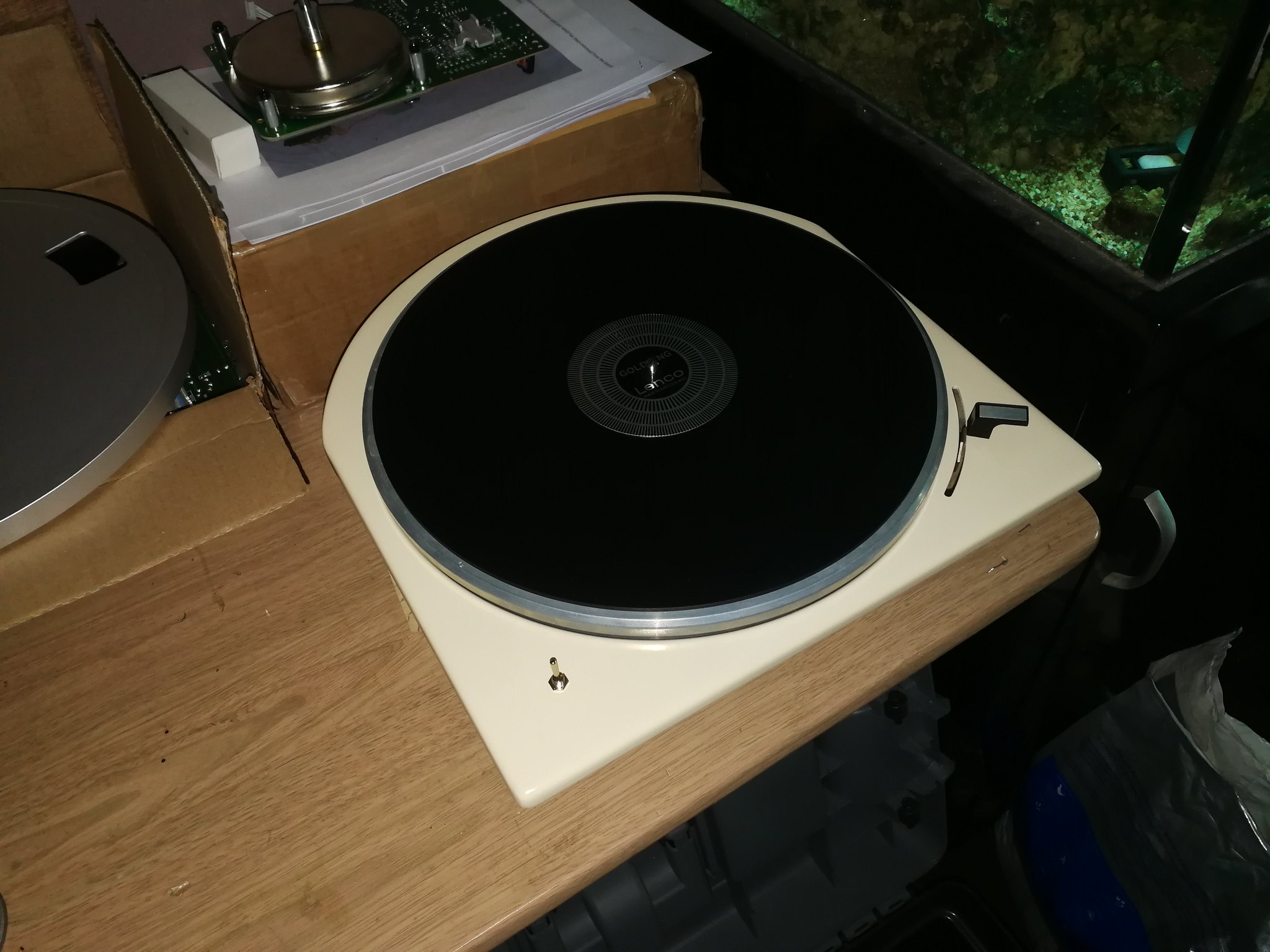 my advice, do as you are told, stay away from society unless you really really have to, and just look around your pit for something to do. and fergodsake stay off the internet as much as poss if you are of even a remotely nervous disposition.

do those little jobs that have been sat just on the edge of needing doing for ages, if you have some wood/valves/transformers/an old bike/something that wants fixing, whatever, make something. do things to keep the brain engaged rather than sitting on your arse binge watching buffy the vampire slayer. I did that for about 3 days and felt a vegetative state coming on. didnt like it much.

Making a cellar "stable" door. 7' 6" x 4'. Lapped edges on each board. Big hinges and stainless A2 screws and bolts.

Rebuilt one of our shower cubicles and repainted that bathroom - looks like new now. Do another one this weekend.

Replaced whole property WiFi with Ubiquiti UniFi kit. Identified every MAC address on the network and labelled them in the UniFi controller.

Checked my mother is ok (she is). Checked on a whole bunch of oldies in the village. Took them food.

Bazillion more things to do...

destroying computer chips...not as satisfying as it sounds...

surveying the half finished barhroom renovation after laying off the tiler...
There's nowhere you can be that isn't where you're meant to be
Top

I've got a JUMBO POT of Gummy Bears that the Grand Child can't have due to the present situation.
I've got a 30'ft long Hallway and 28'ft living room.
I've been placing the Gummy bears at different spaces and been carrying out timed slalom runs, around approximately 200 Gummy Bears.
My most successful run so far is a 18 minutes and 33 seconds 4 hundreth's of a second at a spacing of 78.9mm between each Gummy Bear.
I have tried this at spacings ranging between 59.2mm and 97.6mm.

I'm bored with Gummy Bears now, I'm tempted to to get some Haribo's to give them a go

Since Tuesday Ive been working from home! Almost normal working except for all the contact with my colleagues being via mail, Teams, Skype etc. I'm conscious that I'm less productive but maybe that'll get better as I settle into it.

Each day I've finished work at 16:30 and headed out on my bike for my solo exercise, which is a real release. After that, eat and a bit of relaxation and some hobby stuff. I've not watched TV all week - every channel seems to be showing the same programme, about some apocalyptic virus outbreak.
Top

I’ve got the Super Rocky valve amp under construction. I had to do something as the ‘flu’ has just about gone. The anxiety however went off the scale, almost reaching terror proportions earlier today, but this time I thought f*ck this for a game of soldiers. I think the missus has had had quite enough, over the past twenty years, of putting up with my mental instability.

Funnily enough, this assertive attitude of actively refusing to put up with the incessant barrage of negative mental commentary and the rest of the bullshit my mind comes out with, seems to have had a distinct positive effect on my overall mood.

Mindfulness tells you not to resist, but to observe the internal commentator without reacting, but I can’t be arsed to give the internal commentator any more of my valuable time right now; I suppose, this is exactly what mindfulness is all about. It’s taken me well over a year of practice to ‘get it.’ About bloody time. It’s not about listening to plainchant and watery noises on headphones, trying to relax; it’s actually about telling the internal commentator to go feck itself. I’ve better things to with what’s left of my life than to listen to its paranoid bleed’n ravings, 24/7. There comes a time when enough is enough.

Anyway, back to the Super Rocky amp. It’s going quite nicely and should be playing music sometime next week. Then there’s the garden to spruce up, and a shit tip of a back bedroom to clear out.

Onwards.
Last edited by Cressy Snr on Thu Mar 26, 2020 7:54 pm, edited 4 times in total.
“The sound you love today may not be the sound you love tomorrow, and with tube circuits you can continually retune your gear to what reflects your current vibe...so you can get even down deeper into your truth.” (Harvey Rosenburg.)
Top

Ant has the answer to that Steve, a 4 ton skip.

The problem with WFH is I work longer hours. There are lots of jobs to do but I can't get near them. Not the worst place to be at all.
Top

Just joined in the ‘clap for carers’ The whole street was out, maintaining social distancing of course. Excellent! Brought tears to my eyes.

Last edited by Cressy Snr on Thu Mar 26, 2020 8:12 pm, edited 1 time in total.
“The sound you love today may not be the sound you love tomorrow, and with tube circuits you can continually retune your gear to what reflects your current vibe...so you can get even down deeper into your truth.” (Harvey Rosenburg.)
Top

We were going to have the back garden landscaped which I was really looking forward to as it's a huge job and I wasn't going to be doing it. 6 weeks work for a landscaping team. Well that's my job now for the foreseeable. We're on our third skip. Drive is full of 4 jumbo bags of sand for starters and a skip with 69m2 of paving arriving tomorrow as well as a lot of fencing. But mucho dirt to be put in the skip first.

The ensuite was the project on the go before this all started and that's at the stage where it needs tiling. Got all the materials in before everything shut down. But trench for hedge outside is the priority now.

. Beautiful sound. Just the incentive I needed. Had been wanting one for years. When looking where to buy, a £60 discount voucher popped up. Result!

Have designed much smaller case for GM70 amps which needs making. Got all the wood for that.

Trying to get as much positivity out of this as possible.
https://izzy-wizzy.com/
Top

Tidied up wring behind the TV, may tackle the shed soon.

Leaned out of the bedroom window to clap the carers. I didn’t think anyone would join in, but the whole village was echoing with applause. Very moving, as we have a number of doctors here.

Amazingly clear sky tonight with Venus and the new moon prominent. The ISS will be going over at 8.29. Should be quite a sight tonight.
Top

Has it got trapped wind?
"The fat bourgeois and his doppelganger"
Top

One way of self isolating I suppose. Bit extreme though...

We were banging a few pans at 20:00 as were a lot of folk around here - GP lives reasonably close and I think some had driven up to bang pans outside his house (very rural, so banging at home can't be heard by neighbors...

Poor sod is probably trying to get some kip you rotters!
"The fat bourgeois and his doppelganger"
Top

It's not been a week yet! I'm used to being stuck indoors however normally I at least had a choice...

Trimmed back hedge and mowed the "grass" (weeds)

Repaired the hedge trimmer cable (nicked), wanted to get inside but couldn't get all the screws out of it (Black & Decker thing), nor could I drill them out! Bluddy hell what are they made of, solid chromium?

Rather than bu99er up all my drill bits I put a connector in the cable.

Took down the homemade FM aerial from the front of the bungalow, that doesn't work (wavelength is wrong, needs trimming)