Subjects that don't have their own home
Post Reply
1029 posts

Along the same lines as 'The Audio-Talk Cycling thread', lets have a thread to talk about powered two wheelers as there seems to be more than a few DIY HiFi peeps here who also like powered 2 wheelers too. Some of these powered 2 wheelers can be very DIY-intensive too, which can be fun to share.

Brum Brum Brum.
"The fat bourgeois and his doppelganger"
Top

#2 Re: The Audio-Talk Motorcycling thread.

#3 Re: The Audio-Talk Motorcycling thread.

So, the bike I passed my test on was this. 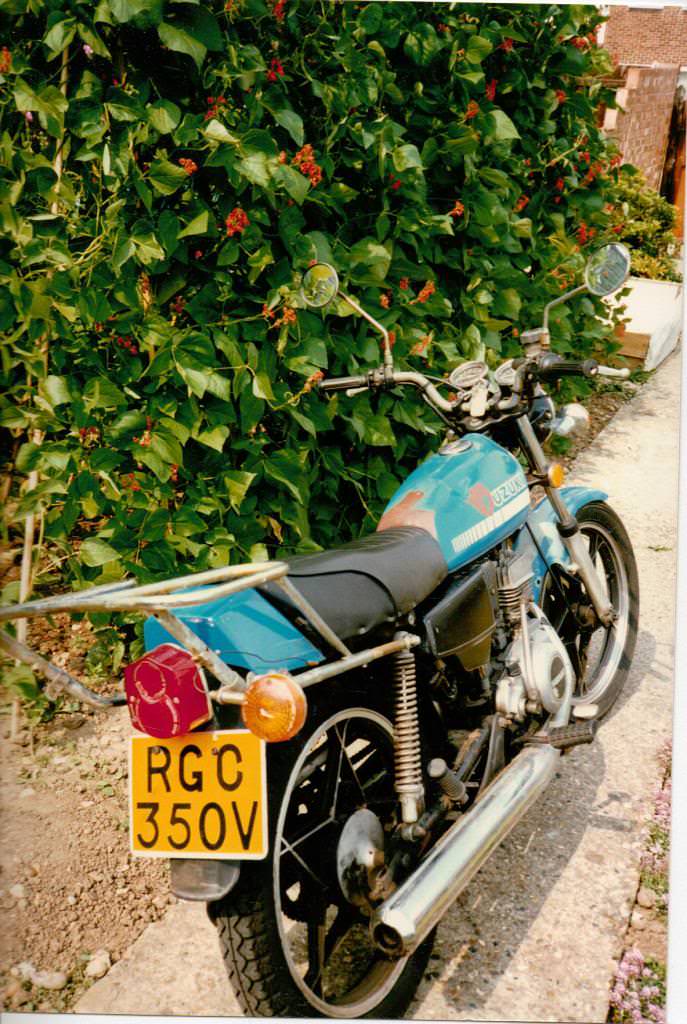 Before I had that, I rode my Mum's 1974 Puch Maxi, LKO 14P, where are you now? Looked like this in Silver (and rust, with a broken pedal because I snapped it after going down hard on black ice in about 1982). 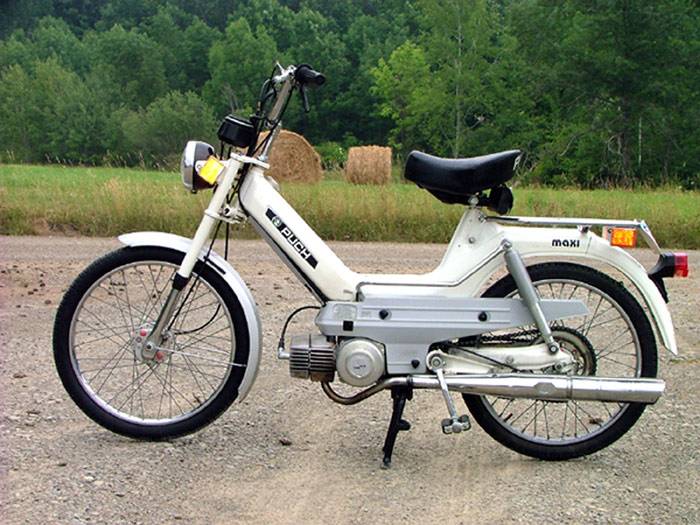 #4 Re: The Audio-Talk Motorcycling thread.

This is my sort of BSA Gold Star.

But, a Matchless G85CS might just be more "me". #5 Re: The Audio-Talk Motorcycling thread.

Passed my test at 17, in 1975 on a red Honda C90.
Took great pleasure in burning off purple Yamaha FS1Es on the bypass, whilst wearing my white, centurion open face helmet, cream bomber jacket with blue stripes from wrist to shoulder on the sleeves, blue suede beetle crushers and bottle green, high waist Oxford baggies, whose 32 inch bottoms flapped alarmingly in the 45mph breeze.
A ride on a mate's Kawasaki KH250 that handled like the frame was hinged in the middle, but ohhhhh that exhaust note, started a love affair with two-stroke triples. which I kept for two years until summer 1978 saw me on one of these: Nothing after that until 1994, when one of these got me to college and back whilst I was teacher training. Fugly as hell but utterly dependable, never missed a beat until a couple of lowlife scrotes nicked it from the back of the house, crashed it and abandoned it on some wasteland about a mile from the house. Me and Ant heaved it home, but my heart wasn't in biking after that, so it was sold to a guy, who did a lovely restoration job on it. I last saw it a couple of years ago, still going after thirty odd years.

Not had a bike since, but loved the experience of motorcycling and am glad it was a part of my life.

“The sound you love today may not be the sound you love tomorrow, and with tube circuits you can continually retune your gear to what reflects your current vibe...so you can get even down deeper into your truth.” (Harvey Rosenburg.)
Top

#6 Re: The Audio-Talk Motorcycling thread.

Passed my test on a venerable cg125, bought the now rusted hulk that was once a clr 125 as I was restricted to 12hp for a period of time, crashed it once and was punted off it twice.
Flew about on a gsxr 750 for a couple of weekends, and after that a mate of mine who was in the army used to drop his triumph sprint St in for me to hack about on when he was deployed or on excersise.
Couldnt leave it on camp as its alarm drained the battery after a week of squaddies poking it to set it off, so he'd give it to me to use while he was away. The clr was gutless but quite alot of fun, the gixxer was a scary missile and the sprint was just lovely.
Last bike I rode was a BMW f800 that the same mate bought, that was rather nice too. The sprint was nicer
Also starring Rex Hamilton as Abraham Lincoln

#7 Re: The Audio-Talk Motorcycling thread.

To be honest I like messing with them more than riding them...
I probably only do a few hundred miles a year on mine. But what the hell.. every one says they are dangerous anyway ?
I had small bikes in my teens then in my 30's decided I should get a lambretta.. I eventually managed to find one, a '69 gp200
Had it for a few years, but I kept buying more, ended up with 3 scooters and about 6 bikes by the mid 90s,old Brits and jap stuff
I was down to 2 bikes ( suzuki tl100r and the laverda mirage) and the Morgan (in boxes) by 2001
Had a few bikes since that I have parted with.. A buell, big yam tourer
And a few more I still have.
I have two in bits that I'm working on honda c110d and s90, the others are all ok. The laverda becomes tax and mot free this year. That only leaves the vrod to tax and mot out of the 8..
Just as well they way I'm going through money at the moment.
The tube manual is quite like a telephone book. The number of it perfect. It is useful to make it possible to speak with a girl. But we can't see her beautiful face from the telephone number
Top

#8 Re: The Audio-Talk Motorcycling thread.

@ Dave, lot of piant rubbed off that Suzuki tank?

Passed my test (3rd attempt) on one of these -

1976 Honda CD175. Handling was dreadful, and tyres potential killers whenever it rained. Apart from that it was really good. Day after my test rode it from home in Essex to Haverfordwest in south Wales, 300+ miles, first really BIG long trip.
Last edited by Mike H on Tue Jan 09, 2018 2:31 pm, edited 1 time in total.
"Entrenched convictions cannot be changed by facts." – Dick Francis
Top

#9 Re: The Audio-Talk Motorcycling thread.

Before the Honda I was using this -

That in the above pic wasn't it tho, but it would have originally looked like that, being a grey one, but mine was a total rat-heap. My dad had it first and was in the middle of rebuilding it, then left it in bits for 10 years. We put it back together again and got it going, I painted it with bronze Hammerite and rode it around like that. Used to commute to first job in northeast London, Woodford nr Chigwell.
"Entrenched convictions cannot be changed by facts." – Dick Francis
Top

#10 Re: The Audio-Talk Motorcycling thread.

Looking to get back into biking this year if I can get my camper van road legal and sold.
Spent last year test riding a few bikes to help me decide what I want and it was good fun.

See if I can dig out some other photos.
Not had many bikes and even less photos but in the 70's was playing on friends FS1e's and the like

#11 Re: The Audio-Talk Motorcycling thread.

Started with a Casal 50cc moped with handlebar gear change. I wanted a Fissie but funds wouldn't stretch.
A huge step up then to a new Yamaha RD200. What a beautifully made machine. Most mates had big British iron so it was ridden hard to keep up.
Another big jump was to a used Kawasaki Z1B. It was a real looker with a wonderful engine but widow maker brakes and handling.
Next one - a used Ducati 900GTS. It was no way near as fast but my life expectancy improved markedly.
Then the dream - black and gold '81 900SS bevel Desmo Ducati. It did everything I ever wanted and more. It was nice and light, frugal on gas, handled
completely predictably and looked rather smart. We even toured on it.
Then came the mortgage.
I tried a bike a couple of years ago - Honda VFR750. Lovely engine but I didn't feel secure on it and just so heavy.
The future - maybe another Ducati.
Top

#12 Re: The Audio-Talk Motorcycling thread.

Top work Team, keep 'em coming. I've got some piccies to scan.
"The fat bourgeois and his doppelganger"
Top

#13 Re: The Audio-Talk Motorcycling thread.

Well here's my first bike, my 'crowd' of schoolfriends had the usual suspects, a veritable selection of FIS1E, AP50, SS50 , but I ended up with one of these donkeys.....
IIRC it wasn't equiped with a brake light, I couldn't read the speedo in the dark and the pedal mechanism fouled up pretty quickly so I just used to bump start it every time I wanted to get it going.
....we all had great fun, I learned how to fall off (frequently!) and the bike got trashed.....I wonder where it is now?!

#14 Re: The Audio-Talk Motorcycling thread.

Then a year later we diverged as a group, the sensible ones bought things like the Kawasaki z200 (shaft drive IIRC) but my lot started building up UK made, low grade metal, 1940's engineered, oil sieves in their dad's sheds....

#15 Re: The Audio-Talk Motorcycling thread.

wow...I had the same machine, pre license time, I rode it with chums on Walsworth common in Hitchin, all under age of course. IIRC mine was green, super fun. No photos unfortunately. As soon as I got my first license I bought a brand new nifty fifty from Jimmy Lanes shop in Hitchin. XNK 47J and I'm pretty sure it cost £105 15/6d...lots of paper round money to pay for that. I never passed my motor bike test and soon progressed to four wheels, courtesy of my grandfather who sold me his 1964 Morris Oxford for £65.....oh happy days(I think).
There's nowhere you can be that isn't where you're meant to be
Top
Post Reply
1029 posts