For the three and more legged things
Post Reply
21 posts

That's not shoddy.....that's Uber-Shod!
"The fat bourgeois and his doppelganger"
Top

Well, an update. Plus a word of caution. Everything was going well until I attempted to try the Class A mode. Then it all went pearshaped.

To cut a long story short, my so called "Sanken" output transistors were in fact fakes. I started to get the idea something was wrong by the time 3 of them had blown. So a search online revealed a site showing how to recognise fakes and so I took my monkey wrench to the swines: 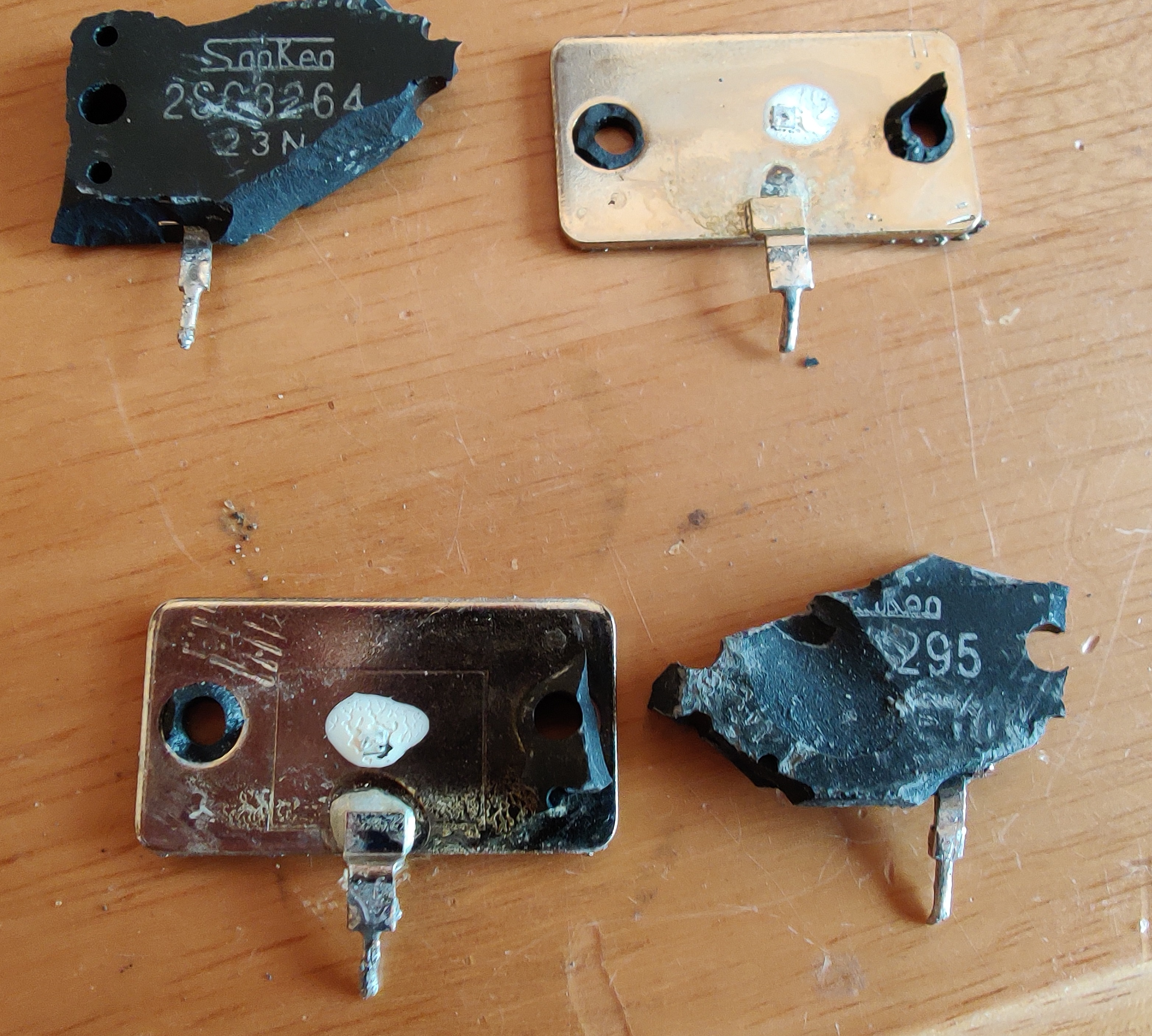 As you can see, the guts are missing and instead a piddly little transistor is glued in there, just to make it test as a transistor. It was fairly annoying as I got them from a reputable shop (who has said they'll refund me now) and not Ali Express or Ebay where you expect to be ripped off.

Anyway, I've given up on Sankens and gone for On-Semi NJW1302G/NJW3281G which I've now installed and on the bench is back up and working and doesn't blow up when I switch to Class A so that's a plus.

The good part of the story is that, with the help of my colleague, who has a much deeper understanding of the circuit, we had fun diagnosing the issues and learned way more than if it had just worked. It was all part of the fun! I hate it when the smoke get out though.
Top

Thanks for sharing that; hope you can get genuin replacements.
"Two things are infinite, the universe and human stupidity, and I am not yet completely sure about the universe." – Albert Einstein
Top

To be fair, I think the counterfeit thing is widespread with this obsolete audio stuff. I can't fault the place I bought them from, they have been totally fair and transparent.I feel sorry for _them_ more than I feel wronged myself. I only bought 4, they probably have a load.

The transistors I'm using now are current production supplied from RS so I can't see any problem there.
Top

Tomorrow I will move it to a place where I can listen properly on both the Class A and Class B modes.

OK, now here's the question: What do people use for speaker cable these days? I am currently running it on some weedy bellwire stuff.

My office system uses some NVA, I can't remember which sort but it's not the mega expensive.

Anybody got any recommendations please? Nothing snake oil.

Thanks in advance!
Top

. I just noticed you are using an Alps Blue.

I take your point! Upgrade to far better pot imminent! (And Elna Silmics)

This amp (with the Transporter) sounds so good to me it is now going to displace my previous office system. (which was never my intention) So in that case it's worth upgrading what I can.
Top
Post Reply
21 posts