Subjects that don't have their own home
Post Reply
21 posts

I couldnt help myself, ive bought an r2r machine.
A fairly entry level machine, i didnt want to spend a great deal of money, but i didnt want a pup either.

I bought a sony tc 377 after researching the usual suspects like akai, teac et cetera.

I didnt want to be trying to find a speed change collar for a 4000ds, or dealing with potentially dodgy heads on the older sony machines like the 355. Apparently the ferrite heads on the 377 are pretty robust, and the machine has spares such as belts available pretty easily.

The one ive bought cost me 200 quid, but looks in very good cosmetic condition, and isnt a loft find. And has been tested and is running and making the required noises.
The number of machines i looked at at the price point that were untested was surprising, i wasnt going to take a punt on those, if i were selling id have got hold of a tape and tested it...

Should be here by the end of the week, so expect a raft of stupid questions, ive never even seen one in the flesh. And have no idea what to do with one.

It just looks so cool i had to have one.
Ill be able to record the daughter playing her guitar too which will be really nice to do
Hey, wait, I got a new complaint
Forever in debt to your priceless advice

Can't wait to hear your impressions and experience with it.

I used to lust after a Teac (or maybe Technics) r2r machine in the window of one of those shops in Edgeware Road back when I was working in London in 1983. I couldn't afford it though, had to "settle" for cassette decks.
Top

Yeah also love to hear how you get on with it. I bought a tc377 new in about 1973. kept it for about 5 years..it was great fun. I've still got a couple of tapes somewhere.. recordings of the 'inside leg band' which I was 33% of. happy days. I remember when a chum came along to record some of our sessions....he had a revox so I developed r2r envy for a while.I was mostly smitten by the fact the revox had electronic buttons instead of the old clunky mechanical controls.
There's nowhere you can be that isn't where you're meant to be
Top

No "stupid questions"! An r2r machine looks cool and sounds cool. I had for many years an Akai GX-630DB and it was the highlight of my sound system. I recorded not only my vinyl for having a compilation of my favorite music but also for the sound. High speed at +2dB recording level produced this wonderful saturated sound I am trying to achieve since those good old days.

The only downside was that it was a lot of work to change existing compilations. For some time I used a professional Sony DAT recorder with remote control and the option to create playlists. But in the end it was so much easier with a computer based digital system.

I tried for years to recreate this slightly saturated sound and could come pretty close with single tube DHT gain stages and certain isolation pads under the DAC and /or the gain stage. But it's still not exactly the same. Handwoven Rattan coasters produce a nice effect(in my system) that goes in the direction of saturated tape.
Top

Have fun with it Ant. You getting any reels or tape with it?
Top

Not to be misunderstood: The +2dB were of course the settings for the peak levels not the general recording level.
Top

There is a single tape with it, the one it was tested with. Knowing my luck, my first taste of r2r sound will be mantovani

Hey, wait, I got a new complaint
Forever in debt to your priceless advice

I can only hope......
Hey, wait, I got a new complaint
Forever in debt to your priceless advice 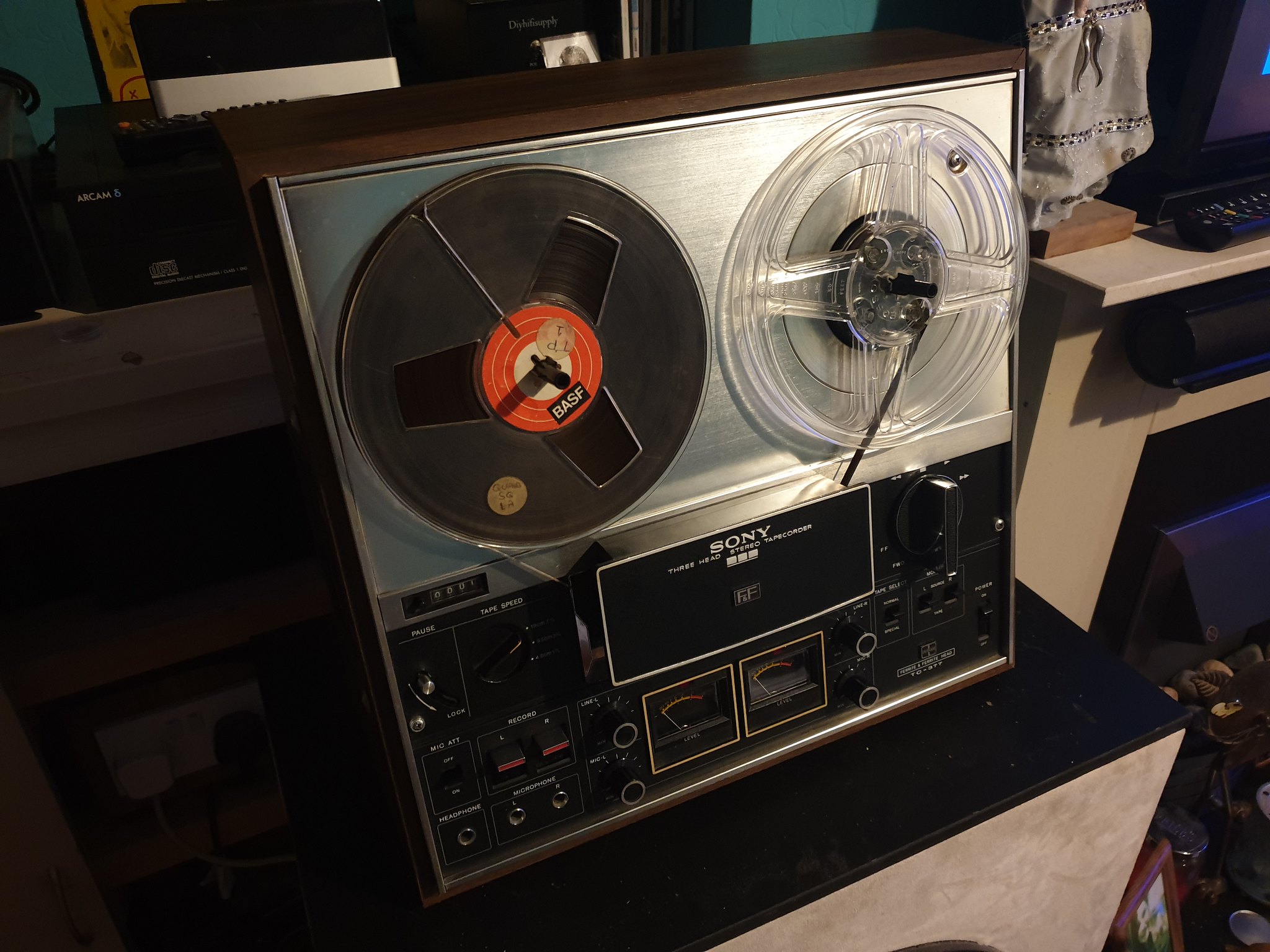 
well it turned up today via a courier.
cosmetically, its about as good as you could hope for. there are no dings in the veneer, no dings or scratches in the brushed stainless, one tiny scratch in the black paint, and one of the pins that the head cover hangs on is broken. not a deal breaker, i could make one easily enough. the vu meter bulbs are good and strong too. even has the original din cable and power cable.

but predictably, it's arrived broken.

it will fast forward and rewind, the auto stop works, the tape sense wire is working perfectly and is damped as it drops.
but it wont play. it would barely rewind at first, but it now does so after sorting itself out on its own.

when play is engaged i can hear the drive engaging with something, but its not engaging the reel. i presume there is either an idler that is directly engaged by the motor or a belt driven idler that is moved into place by the mech, whatever it is, it don't work. which is very galling and disappointing.

i bought this one because it was tested as working. i don't doubt that it was when it left the seller, but its a 200 quid ornament now its arrived here.

the seller has agreed to take it back, the question is wether i want to keep it and fix it, given its very very good cosmetics. ill have to make a decision.

p****d off.....
Hey, wait, I got a new complaint
Forever in debt to your priceless advice

the seller has agreed to take it back, the question is whether i want to keep it and fix it, given its very very good cosmetics. ill have to make a decision.

Even if you manage to get it working, the novelty may wear off after a while and it becomes an expensive doorstop (or boat anchor).

PS I'd never get something like that by courier.
Life is what happens to you while you're busy making other plans. John Lennon

Need a service manual really to know how things are supposed to work, what they look like and how to test stuff. I've got an Akai GX370D, from a mate at Maplin, soon after I got a second hand service manual (from the US!), and I've needed it!

Belts can be very dodgy due to age and cause a lot of bother, I'm lucky the Akai has only 1 belt, all it does is turn the position counter, and guess what, it doesn't work.

Should fix it really but it's such a faff to get at it.
"Entrenched convictions cannot be changed by facts." – Dick Francis
Top

I would let it warm up first. There may be condensation inside that’s causing things to slip.
Resistance isn't futile it's V / I.
Top

i waited while it was warmed up before i powered it up, i figured it was slipping on rewind because of abit of condensation as it was really cold when it arrived. it got a good coating of condensation all over it when it hit the warm air in the house
looking at some diagrams and pics of the insides of it i reckon i know whats wrong with it, but i didnt buy it to have to strip it down and fix it.

ill give it one more try in the morning, but if it still wont play ball it will go back. im not faffing for the sake of it
Hey, wait, I got a new complaint
Forever in debt to your priceless advice

I gave it one last try before boxing it back up, no joy.

A little bitter and disappointed, i gave the tape speed control a few sharp clicks between the speeds, and there was a big clunk. Something dropped into alignment.
It now plays.
The transport is abit noisy, various squeaks, clunks and whirrs, but it plays.

Ive plugged it into the amp and it makes sounds.
I thought it was still broken initially as no noise came out, until i flicked the monitor switches.

What came out of it was not mantovani, andy williams, pat boone, or even kajagoogoo!

It is some sort of orchestral piece, but it also has moogs or something similar on it

some sort of rather interesting classical fusion..... if thats a thing.
The tape also had a hand written sticker on it that says quad sq 1a, so presumably its been done from a cd4 record.

I cant sit and listen to it because the kids are on teams doing their online lessons, but the short blast i did get was very encouraging.
Especially the bass end.....
Last edited by Ant on Thu Jan 14, 2021 10:51 am, edited 3 times in total.
Hey, wait, I got a new complaint
Forever in debt to your priceless advice