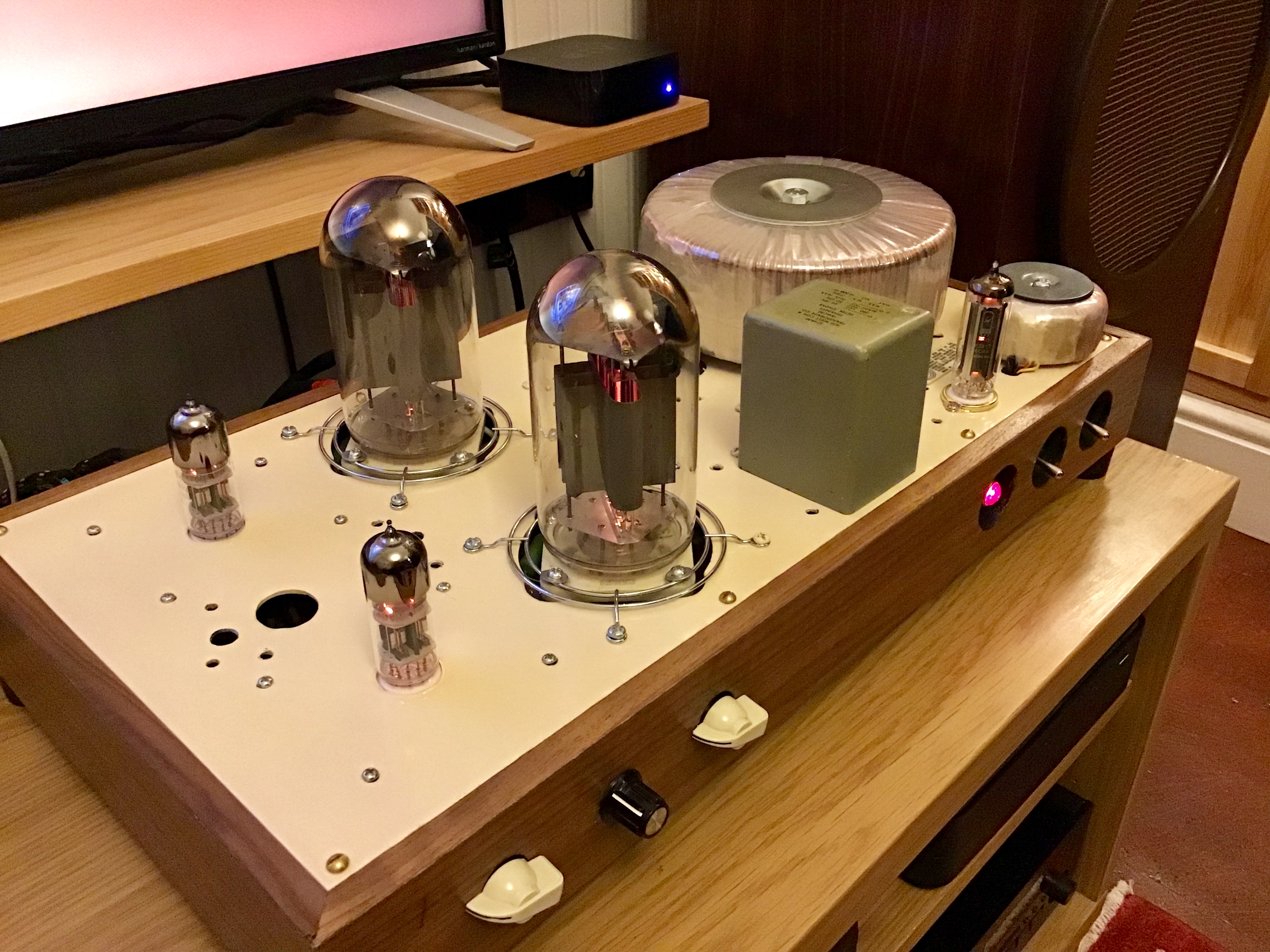 Right!
In the beginning there was a Rozenblit Mini-Beast supply. This single supply had three take offs, all decoupled from one another by the usual arrangements, which I don’t need to go into on this forum, as we all know how to do that. This supply was mentioned earlier in the thread as a sort of ‘get-you-going’ kind of arrangement and of course it did get me going after a fashion.
The sound from this SE, single tube OTL has, in the interim, been so good that I’ve left the power supply on the back burner. Didn’t mean to, but the damn’ amplifier provided such good music that I didn’t think there was any point in “improving” things by messing about with it; “If it ain’t broke” and all that jazz.

Anyway after visiting Steve last week, to acquire some ECC82s for a project I’m currently collecting bits for, we got to talking about power supplies and their vital importance, particularly in single-ended valve amplifiers. The upshot after I got home was to read some of my books and have a ferret about on the web.

There is remarkably little literature on valve amp power supplies apart from, “here is a transformer, here is a rectifier and you can either use an LC or CLC, or chain some of these together, and don’t forget to decouple your stages from each other with resistors and caps, and don’t forget to put the decouplers as near as possible to the valves they are feeding. Oh and bifilar chokes with exotic wire and amorphous ‘C’ cores are the bees knees, and will take the sound of your 300Bs to stratospheric levels of aural ecstasy.” That may well be the case but I no longer have the budget for that sort of tomfoolery.

I’d started a journey into the subtleties of power supplies, with my 6B4G monoblocks that had single channel PSUs regulated with the ubiquitous 6080 and 6AU6 error amplifiers; their screens regulated with glow tubes. These were lovely amps, and like a fool I broke them up.

After that I sort of lost interest; going back to unregulated single channel PSUs, but with SS rectifiers and huge (for valve amps) cap banks. These worked great with Class A/B push-pull pentodes, at least they did with the “Barbarik” pentode amp I sold to Paul.
Top

When I had the OTL on a breadboard, I’d experimented with multiple power supplies, voltage doublers feeding input/driver stages and high power chokes and caps feeding the output stages and got hum and a lot of gloopy 2nd harmonic distortion for my trouble. There had been promise, but it had not been realised.

So to the present and after reading up in Morgan Jones’ ‘Building Valve Amplifiers’ and Merlin Blencowes now out of print power supply book, I studied their chapters on earthing very carefully and drew out a scheme for a triple power supply.
So after ripping all the guts out of the amp last weekend I installed three CLC supplies: one for the input stage, fed from a small toroid and an EZ81 rectifier, another for the driver stage, fed from one of the 115V windings on the big toroid via Solid State rectification, and yet another for the output stage, fed from the other 115V winding on the big toroid, again via SS rectification.

There is no hum!

OK, there is no hum and that is great.
Soundwise: I look forward to sharing the sound of this 1W wonder with folks at Owston next year. It’s good and I’m not going to describe it on here as I can’t. Folks’ll have to tell me what they think.

Certainly, completely independent power supplies on, and optimised for, each stereo amplification stage are the furthest I’ve gone to date with this sort of thing. I suppose, the ideal setup, ought to be six mono power supplies as opposed to the three stereo ones I have at the moment, and I could look into doing that at some point down the line. That would mean, however, a new build of monoblocks and a lot of new iron, including four new mains transformers and six chokes, so budget constraints will most likely prevent that happening. Notwithstanding all that, I’m certainly encouraged by, and very pleased with the results I have now.

I know for example that Bruce’s original 1990 push pull monoblock OTL, using eight 6AS7As, had a surfeit of power supplies and those who dared to build it were awestruck with the sound. https://www.bonavolta.ch/hobby/en/audio/6as7_2.htm
Top

I'm not 100% sure all this dual mono, supplies hither and yon is a great idea. There's something musical about having a mono supply on a stereo amp adequately decoupled. I've taken amps "backwards" to a mono supply from multiple supplies and liked the result. Less HiFi, more musical communication is the only way I can describe it. But I also acknowledge that it isn't a path for everyone as some peeps like the more HiFi route.

izzy wizzy wrote: ↑
Sun Sep 29, 2019 12:43 pm
...I've taken amps "backwards" to a mono supply from multiple supplies and liked the result. Less HiFi, more musical communication is the only way I can describe it.

Yes I thought that too, especially given the somewhat lacklustre results of separate power supplies, when I had the breadboard. Buuut.....the results of the latest experiments are not what I would term ‘hi-fi’ in any pejorative sense. They are a lot closer to the music than I would have thought. A very good result.
Top

Just pulled the trigger on a couple of nice NOS EZ80 rectifiers for the preamp section power supply; cheap as chips and perfectly suited to preamp or driver stage duty.
Top

One of the RFT EZ80 rectifiers I bought.

Now, normally I wouldn’t be so geeky/crass as to post a pic of a let’s face it, a not very exciting little tube, but there’s a story.

I had an old Mullard EZ80 that I suspected was a bit tired as it was only putting out 80V, so on receiving the pair of new rectifier valves this morning, I tilted the amp to get a clip lead underneath, on the point where the preamp stage HT entered the ‘B+2’ pad, on the nearest one of the preamp/driver boards I could get at.

This rectifier puts out 118V, so one can probably safely say that the Mullard was way past its best. Removed the clip lead, set the amp back down flat and the right channel had disappeared!

Amp was hoiked out of system and put on test bench. Sig gen and scope got out, ages spent looking for a mains lead for the scope, then I couldnt find the bag of probes

Changed speaker leads and normal service resumed. The solid cores had snapped inside the insulation on the faulty red lead, at the amp end, where the lead met the plug. Solid core speaker leads obviously don’t like being handled too much.

One good thing that did come out of the investigation inside the amp was that the 13E1s are holding up superbly. Looking back at my notes, the bias voltage on either valve has not moved a millimetre from what it was nearly a year ago now. They’re cruising along quite nicely. Can’t complain at that.
Top

It's good to see you getting so much enjoyment out of this project Steve, both musically and as a DIY audio hobby.

I've parked my build for the moment as I've shifted my attention/enthusiasm to the Valve DAC project, however it's far from dead.

I've been thinking about recycling the parts from my 6C33C project into another 13E1 build as it might be interesting to see how its 6SN7-based Aikido front end works with the 13E1s - I have the input/driver boards fully assembled. I also have a toroidal transformer for it that I would like to reuse but, not having a proper understanding of valve amp operating parameters I'm not sure if I can; the issue is that its secondary is only 0-105V (@2A) which will yield me a B+ voltage of around 130V (105V * 1.414 - about 20V drop in the power supply), which was fine for the 6C33C circuit that Wolfgang put together. Any thoughts on the implications of a 130V B+ and is it simply a case of increasing the current through the cathode sink a little - any thoughts from you guys? (BTW, the driver stage would have its own 300V supply).
Top

Less volts and more current would steepen the load line somewhat, not sure if there are triode curves for the 13e1 but it would alter the op point and it depends wether the operation would be either more or less linear.
You'd have to look at the curves and see what it looked like. 20v drop suggests a valve rectifier, an ss rectifier would drop less, maybe get it up into a similar op point if the v drop could be made smaller
Psud would be useful to simulate what you could get out of the psu under load
Hey, wait, I got a new complaint
Forever in debt to your priceless advice

Well it wouldn’t really steepen any load line, because the constant current sink in the cathode would give an essentially flat load line. Valve rectifiers are right out for the output stage due to the huge (for a valve amp) current demands. 130V ought to be OK if the current is increased to maintain the power levels (I think).
Top

Thanks guys. The power supply is copied from my 300B SE-OTLs so the 20Vish drop is a known (as long as my ageing memory is working correctly today). Its CLCLC with solid state rectification. The inductors are rated at 600mV so I have a little headroom to increase the cathode sink current.
Top

Cressy Snr wrote: ↑
Wed Oct 02, 2019 9:33 am
Well it wouldn’t really steepen any load line, because the constant current sink in the cathode would give an essentially flat load line. Valve rectifiers are right out for the output stage due to the huge (for a valve amp) current demands. 130V ought to be OK if the current is increased to maintain the power levels (I think).

Ah, forgot they are sat on a ccs, I'm thinking se cathode bias with a resistor and bypass cap
Hey, wait, I got a new complaint
Forever in debt to your priceless advice